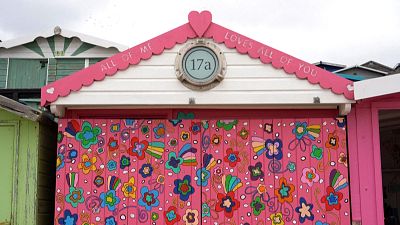 Beach huts are an iconic part of the British seaside, found in very few other countries. You could say that’s because there’s few other places where beaches are so wet and cold. But let’s focus on the good parts of this adorable British tradition.

What exactly is a beach hut?

For anyone who’s not spent much time in British seaside towns, firstly poor you, you’re really missing out. But don’t worry. Your British correspondents are on hand to give you a visual. Beach huts are a very small wooden, one room house. Imagine a small garden shed with a pointed roof and you’re close.

They’re typically painted in bright, primary colours and they’re placed snuggly alongside each other. There’s no getting away from the neighbours here.

How are beach huts used?

Beach huts date back to the Victorian era and were originally much smaller boxes, mostly used only for changing into swimwear. These days, the insides are still fairly simple with no running water or electricity but featuring a small kitchenette for making a cup of tea, a seating area and somewhere to get changed or shelter from the weather.

Owners tend to use their huts to store what they need for a beach visit in the hut, including deck chairs which they sit on outside the hut, people watching or gazing out to sea.

"It comes into its own when it’s a horrible day because I can put windows in, I’ve got spare jumpers and things, and I can snuggle in here, look at the view and forget about the world really," explains Melanie Whitehead, the Chairman of Walton-On-The-Naze Beach Hut Owners Association.

Many beach huts belong to families, passed down from generation to generation and used by every aunt, cousin and brother throughout the year. Others choose to capitalise on their elusive real estate and rent beach huts out to visitors when they’re not otherwise in use.

Where do you find beach huts?

Rows and rows of brightly coloured beach huts line the beach in many of Britain’s seaside towns, such as Essex’s Walton-On-The-Naze, in south-east England.

But despite their size and simplicity, the cost of a beach hut is not so dinky.

And don’t forget, for this mighty price, you can only spend the day there as it’s illegal to stay overnight in a beach hut.

Why are beach huts so expensive?

There’s a few factors which have led to the rising cost of British beach huts and the COVID-19 pandemic has certainly played a role.

"There’s an element of people being stuck at home because of Covid and lockdowns, and so people are trying to explore what they can do within the UK,” says Sarah Stimson, the owner of a beach hut rental company in Walton.

“So we’ve had lots of new visitors who’ve never been to this particular beach before, lots of people who’ve never hired a beach hut before."

The other part of the problem is that there’s just not that many beach huts available. And high demand creates high prices.

"Lots of people have beach huts in their family and then never sell them, so the availability of beach huts is actually quite small, there’s much much more demand than there is in terms of availability," Sarah adds.

“People come here, hire them and then say ‘Oh I would really love to buy one’, and I think that has pushed up the prices somewhat.”

In nearby Frinton-on-Sea, the prices of beach huts are even more surprising. According to Barry Hayes of Boyden Estate agents, before the pandemic huts were selling for around £30,000 (€35,200) but prices have roughly doubled in that time.

With prices like that, the cost of one of these tiny beach huts amounts to nearly a third of the average house price in the UK, which is currently around £255,000 (€298,700).

Watch the video above to learn more about this iconic British seaside tradition.