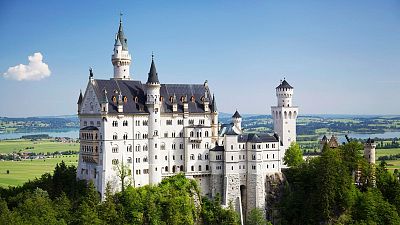 Who doesn’t love a good castle? Fairy tales, romance, epic battles, royal affairs, banquets, parties: they have it all. And Europe is a hotbed for them. Germany alone is believed to have around 20,000 castles.

So we at Euronews Travel have rounded up some of our favourites from around the continent. Sit back, relax and take a look at some of Europe’s most beautiful castles.

This castle looks like it could be straight out of an ancient tale. It is known as the ‘Disney castle’ and Neuschwanstein was actually one of the inspirations for Cinderella Castle at Disney World in Florida.

It was commissioned by King Ludwig II of Bavaria in 1868, two years after the Seven Weeks War where Prussia conquered Bavaria and he lost most of his power. It is said that he used the building of opulent castles to entertain a fantasy that he was still a true king. Maybe just a tad dramatic.

Today Neuschwanstein is one of the most popular palaces and castles in Europe with around 1.4 million visitors per year.

This stunning castle is perched on a cliff 130 metres above Lake Bled in Slovenia. With a history spanning more than a thousand years, Bled Castle captivates visitors with its magnificence, amazing location, and breathtaking views.

It is also one of Slovenia’s most popular tourist destinations and you can even have your wedding in the castle if you want to live out your fairy tale fantasies.

The Rock of Cashel

A lovely, more traditional kind of castle located in County Tipperary in Ireland. According to local legends, the Rock of Cashel originated in the Devil's Bit, a mountain 30 km north of Cashel. St. Patrick, the patron saint of Ireland, is said to have banished Satan from a cave and in his anger, he took a bite from the mountain.

The chunk of stone was spat out at its current location, which is today known as the Rock of Cashel. Sounds legit to us.

Mont Saint-Michel is the Ferrari of castles. Not only is it a majestic building in its own right but it is also set in its own medieval island village. The Rock of Cashel could never.

Located on the north western coast of France, Mont Saint Michel has spectacular seaside views in an idyllic setting.

A captivating castle in Croatia that was built nearly 800 years ago. However, centuries later it fell into disrepair. It was only when Count Drašković took over in the 19th century that it was transformed into the beautiful castle that it is today.

Certainly the most unusual castle on this list, Kelburn was originally built around 1143. Recently the Castle Grafitti Project transformed the centuries-old monument into a stunning piece of art. We love the traditional mixed in with the modern.

The idea was to “take the vibrant and often transient art form of Brazilian graffiti, out of its predominantly urban context and apply it to the ancient and permanent walls of a historic rural castle in Scotland.”

The results are spectacular and it is a truly unique building.

This handsome castle was first built in the 13th century and has gone through many changes since then. The latest design was overseen by the noble Schwarzenberg family whose diplomatic trips to Great Britain influenced the updates. In fact, the castle was inspired by Windsor Castle in England which is home to the Queen herself. So you know where to go if you want some Czech regality.

This castle was built around 135 to 139 AD and converted into a fortress in the fifth century. It stands on the bank of the Tiber River and guards the Ponte Sant’Angelo, one of the principal ancient Roman bridges.

Despite its pretty exterior it was actually used as a prison for people on death row and was the place of many for gruesome executions back in the day. But now it’s a lovely museum so feel free to visit.

A Gothic-style castle on a hill 3km to the west of central Palma on the Island of Majorca. The building is in amazing condition and has been around for 700 years. Castel de Bellver was also a prison and has recently been turned into a museum.

Its circular shape is an unusual design for this type of defensive building and makes it stand out when compared to other European castles.

We also asked our readers what some of their favourites are over on our Instagram and apparently, we are not alone in our palatial passion. Here are some of the most popular responses.

Ok so maybe Mont Saint Michel does have some competition. This castle is simply breathtaking.

In 2017 it was taken over by new owners for €15.4 million after a stint as a luxury hotel. It’s located in Leccio, 30km outside of Florence.

While the outside is beautiful, the enchanting architecture and design on the inside are what elevates this castle. Sadly fallen into some disrepair and laid empty and closed for most of the last three decades with only occasional public visits allowed.

Maybe not technically a castle but we couldn’t exclude this beautiful Portuguese palace after so many of our readers called for its inclusion. And who could blame them as it is a truly stunning building.

Pena Palace stands on the top of a hill in the Sintra Mountains above the town of Sintra and on a clear day can be seen from Lisbon. The 167-year-old building is also a UNESCO World Heritage Site.

Another popular castle with our readers, Edinburgh Castle is one of the oldest fortified places in Europe. It stands on Castle Rock, a site that has been occupied by humans since at least the Iron Age. Research undertaken in 2014 identified 26 sieges in its 1,100-year history, giving it the questionable honour of being "the most besieged place in Great Britain and one of the most attacked in the world".

It is also one of Scotland’s most visited tourist attractions with over 2 million people touring the building every year.

Also known as the ‘Castle of the Counts’, this beautiful fortress can be found in the city of Ghent. It’s open to the public and boasts a unique array of torture equipment that is put on display for visitors. The collection even includes a guillotine that was actually put to use back in the day.

This Neo-Renaissance castle is in the Carpathian Mountains. It is relatively new compared to others on this list with construction only beginning in the late 1800s and finishing in 1914. But you know what they say, beauty is not defined by age.

So there you have it, 14 of Europe’s unique and most impressive castles all wrapped up in a handy little listicle. Are there any we missed out on? Let us know which is your favourite by keeping the conversation going over @euronewstravel.