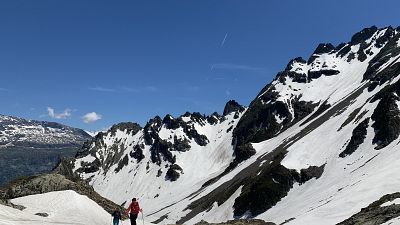 Camille Bello moved from the tropical city of Caracas in Venezuela to Lyon, France in 2016. Four years later, an unexpected encounter with 67-year-old Jean-Phillipe took her to the French Alps and helped her to fall in love with France.

During my first year in France, I was a foreigner and didn’t speak any French. In my second year, I spoke French, but I was broke. In the third year, I was no longer broke, but I was heartbroken. A relationship had gone badly.

In my fourth year, I met Jean-Philippe. He was 67. I was 25. Everything changed after that.

When I moved to Lyon in 2016, there was a lot I didn’t know. Firstly, how much I would miss nature. I come from beautiful Caracas, a city surrounded by a valley of rain-forests mountains. Growing up, I would spend my weekends back in the countryside where my dad had orange groves. We would go hiking, horse-riding and climb trees. On Sundays, when we came back to the city, my mom would always say: “Mmmh I smell the flowers in your curls.” She loved nature too.

Mountaineering runs in my veins. My parents were both mountaineers and they passed that on to my sister and me.

It was easy to live this way in Venezuela, as nature was everywhere. In the capital, Caracas, the mountains separate the city from the Caribbean Sea. You would wake up to colourful birds singing by the window and go to bed with the smell of rain in the air. Everything grows. Everything flowers.

Something else I didn’t realise was that in Lyon, I was actually living in the capital city of Rhones-Alpes - the region of France home to the French Alps. I had the mountains right on my doorstep.

The French and their ‘look’

The other thing I didn’t know about before I moved to France was a secret language.

I soon learnt about it. I like to call it ‘the look’. It conveys, in quick succession: surprise, then offense, followed by a strong ‘shame on you’ sort of look.

The look is painful, but it is such an effective teacher of some aspects of French culture. It took me a few weeks of getting ‘the look’ at the gym to realise that I was being rude. I was breaking the French code that requires you to say ‘bonjour’ to everyone, everywhere.

It only took one ‘look’ for me to understand that, in France, it is ok to be in a bad mood and be transparent about it.

‘Bonjour Madame can I buy some flowers?’ I would say.

She gives me ‘the look’.

Another thing about France, is that they are crazy about social clubs. Associations, societies and groups that like doing things together. According to the French government, there are about 1.3 million active associations in the country today. After my bad break-up in year number three, I decided it was about time I got back to the mountains and so the obvious thing to do was to join a hiking club.

It was in my first meeting at Club Alpin Francais, Lyon (CAF) that I met Jean-Phillippe.

I can remember staring at the front door for a minute, taking a picture of the sign, and then bracing myself for the worst as I stepped across the threshold for the first time. On the left, the wall was covered with bookshelves full of mountain climbing books and movies, with beautiful pictures on the covers. On the right was a room full of mountain climbing equipment. There was a desk at the back of the room and around eight people, men and women, facing away from me.

They heard the door close behind me and turned around to look. I waved awkwardly and smiled. “Bonjour” I said. “Bonsoir!” they replied in unison, looking at me with huge smiles. They all stared curiously. But no one gave me ‘the look’!

One man came closer and introduced himself. It was Jean-Philippe. He was tall, had a huge smile, and began to ask me hundreds of questions. I told him about Venezuela, about my life in France, and my mountaineer parents. I told him about how desperate I was to be out in nature. He heard it all attentively, made jokes, and even tried some Spanish, stopping every now and then to introduce me to the people around us. After about an hour of chatting, Jean-Philippe brought me to Jacqueline, who would register me as part of the club.

“You’ll have to be patient with me honey. I’m not good friends with the computer,” she said. It was then that I realised I was the youngest in the room - by at least four decades. Everyone had white hair.

Jean-Philippe walked over and asked, “so you won’t be bored hanging out with a bunch of old guys? There are other activities like trail running with people more your age.”

We said our goodbyes with the customary cheek kisses. I felt euphoric as I left. I hadn’t felt this way in a very long time.

These were the coolest French people I had ever met.

On the following Saturday, I got a WhatsApp message from Jean-Philippe.

“My dear Camille. I have been thinking about you. There were no plans with CAF this weekend, but I can arrange something tomorrow if you like.”

I didn’t hesitate. “Dear Jean-Philippe, I would be DELIGHTED!”

On Saturday night, I told my friends I couldn’t join their party. I wanted to make a healthy fruit salad for my new mountain friends, and go to bed early.

Jean-Philippe picked me up at 6:25. He looked like a movie star, wearing sepia colours and an Indiana Jones hat. I got in the car, and we went to pick up Bernadette, then Bernard, then Karinne. After me, I think Jean-Philippe was the youngest in the group.

I was mostly quiet on the way, listening to their conversations and answering questions about home. They spoke about the club, future trips and about good restaurants they had recently tried. A lot like my conversations with my other friends.

We made a pit stop to have pain au chocolat and coffee. “It’s tradition,” they said.

The road was beautiful, the landscape always changing. After an hour or so, Les Alpes suddenly appeared. I had goosebumps. Jean-Philippe smiled at me through the rearview mirror.

We hiked through a forest at the Massif des Bauges. We started walking from a high meadow that had a pond, and some cows. It was raining.

Jean-Philippe hung a laminated map around my neck and showed me how to read it as we hiked. He made fun of me as I read it upside down. “Mais, Camille! (but Camille).”

They knew the names of flowers I liked: Bouton d'or, Campanule, Centaurée à une tête. They told me how 10 years ago, the forest would sing very loudly, but now it’s quiet. “It’s climate change,” they said.

They were fast! I was always straddling behind.

After two hours or so, we got to the top. “Lunch time,” said Jean-Philippe. I got my fruit salad out.

As I looked at them, confused, they opened their backpacks and brought out Saucisson Lyonnais (a dry-cured sausage), a baguette that had been sitting on top of Jean-Philippe’s bag, cheese, paper cups and a bottle of wine.

I put my salad away. God I love the French.

We went back down. It rained hard. We ran like children.

The hike ended at a tavern in a very small village named La Thuile. They wanted a shot of hot liquor, me a chamomile infusion. Jean-Philippe chuckled as he said:. “Do you know what we call that in French? Le pisse mémé (grandma’s pee)!”

I did 4 hikes with the club, two of them with Jean-Philippe. They stopped when winter came, then coronavirus. I have continued going on my own and sometimes with friends, but I always think of him.

Through the greatness of the mountains, Jean-Philippe helped me let go of my bitter sense of exile to welcome a golden realisation: I. Love. France.

Something else has happened since I met Jean-Philippe: I also met a guy I like. His name is Romain, it rhymes with romance. He’s French like in books and gives many ‘looks’, but I like him still, thanks Jean-Philippe!