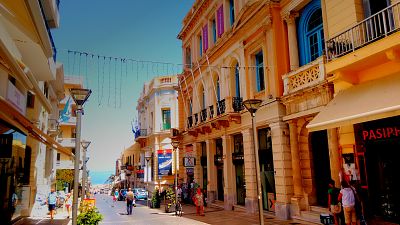 25th of August Street in central Heraklion leads from the Morosini or Lion's Fountain to the Mediterranean Sea.   -   Copyright  Anthony Grant   -
By Anthony Grant  •  Updated: 16/11/2020

Vivid is the memory of one autumn afternoon in Mykonos a few years ago when thunderstorms rolled in and tourists were few and far between, making the famous party island feel like the loneliest spot on earth.

But the Mediterranean being the cradle of many civilisations and cultural mash-ups, there are actually plenty of island cities that buzz and hum all year long.

While late autumn and winter isn't going to be beach season anywhere, cultural heritage is impervious to the elements and invites discovery in the storied cities of Sicily, Spain's Balearic islands and even some Greek islands.

Spain's Balearic Islands, of which Mallorca (Majorca) is the largest, are perhaps best-known for their stunning scenery and vast array of beautiful beaches. But despite the summer holiday allure they've got urban appeal in spades too, mainly in the capital, Palma (also known as Palma de Mallorca).

With a population of more than 400,000 Palma fairly crackles with activity in each season. Its most iconic sight is the soaring Gothic cathedral, La Seu, which sits on a site once occupied by a mosque and a church even before that.

From its medieval streets and vibrant markets to Baroque churches and myriad galleries and restaurants, Palma makes for an all-season island city break with authentic Spanish flavour.

Catania is an Italian underdog to be reckoned with. It’s a historic and bustling place with a rich Baroque aesthetic and bustling markets under the gaze of mighty and somewhat daunting Mount Etna, the biggest active volcano in Europe.

The earth’s crust gets pretty impatient in these parts, and Catania has been destroyed by earthquakes not once but twice.

The city today is a jumble of ancient ruins, beautiful old buildings in varying states of preservation or decay and also more modern buildings. There’s a second-century AD Greco-Roman theatre, an ancient Roman forum and numerous early Christian basilicas, too.

The signature sight? Oddly enough, a fountain whose centrepiece is a small elephant made of black lava with an Egyptian obelisk sticking up from his back.

“Without Sicily, Italy leaves no image in the soul. Sicily is the key to everything," Goethe wrote in his Italian Journey.

That was back in 1787, but what hasn't changed is that no one who has ever been to Sicily leaves without at least a little Sicily-envy and that often starts with Palermo, the island's teeming seaside capital.

Landmarks include the ornate Palermo Cathedral, the Palazzo dei Normanni and the impressive baroque Teatro Massimo opera house. Aside from its lively public spaces like the Ballarò street market, Palermo has its share of quirky sights like the Capuchin Catacombs.

One of the most magnificent cathedrals in Italy is located in Monreale, just outside the city centre.

Fun fact: Palermo was actually founded by the seafaring Phoenicians, who called it Ziz.

Siracusa (Syracuse) is another Sicilian island stunner, but unlike Palermo and Catania this city rocks a mellower vibe.

Ancient Syracuse was founded by Greek colonists who arrived from Corinth in the 8th century BC. The heart of the old city is Ortygia (a name that comes from the ancient Greek word for quail), and is the most interesting part of town to visit. Cicero called Siracusa “the greatest Greek city and the most beautiful of all.”

Today the fifth-century BC Temple of Athena lives on as part of a more recent cathedral and romantic spots like the Fountain of Arethusa and Orecchio di Dionisio, a cave that resembles an ear (a little imagination helps) beckon come rain or shine.

Is Heraklion the most beautiful city in Crete? Maybe not, although its intact Venetian ramparts and 16th-century fortress facing the harbour lend it an atmosphere you won't find anywhere else.

This important Cretan port—called Irákleio in Greek—is named after the Greek hero Herakles, or Hercules, and is Greece's fourth largest city.

As such it is simply brimming with cultural treasures, foremost among which are the recently renovated Heraklion Archaeological Museum which houses the best collection of ancient Minoan art in the world. Plus, the restaurants in Heraklion serve some of the best food in Crete.

Fun fact: Nikos Kazantzakis, author of Zorba the Greek and after whom Crete's biggest airport is named, is buried atop one of the bastions of the city's tall ramparts.

Though separated by a mere 134 kilometers, Chania and Heraklion have a bit of a New York vs. Los Angeles rivalry going on, with acolytes of the former quick to praise their city's pretty harbour—a legacy of 14th-century Venetian occupation—charming architecture and wide array of great restaurants.

In other words if you go to Chania don't make the mistake of calling it Crete's second city, even though Heraklion is the capital.

Don't miss Chania's lesser known but fascinating archaeological museum, which sheds light on this lively city which has its genesis in the ancient Minoan settlement called Kydonia.

Seaside Limassol is the largest city in Cyprus after its divided capital, Nicosia. The long seafront promenade is lined with upscale restaurants where lovely views of the Mediterranean are always in abundant supply.

Two great beaches just outside town include Lady’s Mile and Governor’s Beach, both perfect for taking some winter sun. In the heart of the city there are tavernas and cafés galore in the narrow streets fanning out from a sturdy castle built by Guy de Lusignan in 1193—it's where a lovestruck Richard the Lionheart married Berengaria of Navarre.

Elsewhere remnants of medieval and Byzantine fortifications mix with restored British colonial architecture, which along with vibrant street art make Limassol more Instagram-friendly than you might have thought.

It may be the smallest of European Union capitals but Valletta, the capital of Malta, has a sizeable population of nearly 400,000 people and its superb array of intact Baroque architecture has earned it the nickname of Superbissima.

Valletta's many bastions and fortifications look like they come straight out of a 1930s' Hollywood swashbuckler movie but they are the real deal, having been built mainly by the Knights Hospitaller in the 16th century.

While Valletta is an official UNESCO World Heritage Site, it is also a wonderful modern city to explore with great museums, Maltese bakeries and restaurants galore.