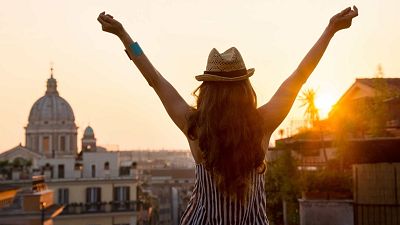 Families looking for enriching ways to experience past and present Roman culture can now enjoy it as part of a five-star luxury stay in the heart of Rome.

Situated on a quiet street in the epicentre of the city, the boutique Sofitel Roma Villa Borghese is a former 19th century Roman palazzo, which is in walking distance of some of the city’s best known cultural landmarks and parks.

While visiting the Trevi Fountain, Villa Medici and the Spanish Steps are a given in Italy’s capital, there’s so much more for travellers to uncover.

From gladiator school to making your own gelato, here’s what else you could be getting up to next time you book a Roman holiday...

An al fresco bike tour and a watercolour masterclass

Dating back to 312 BC, the Appian Way is the first and most important of the great roads built by the Ancient Romans.

It’s known for its rich collection of treasures, archaeological remains and ruins.

Along the way, a tour guide will show you the villa of emperor Maxentius, the mausoleum of Cecilia Metella and the ancient church of Saint Sebastian, to name just a few.

After the ride, families can enjoy a picnic and afternoon of learning the art of watercolour painting outdoors, with the guidance of a local artist.

Tea with a real Princess

Keen for another history fix?

Villa Aurora is home to the only Caravaggio Fresco painting in the world, as well as Michelangelo’s ‘In the garden’ and many others.

Here, too, is where the lady of the manor, Principessa Boncompagni-Ludovisi, will partake in an afternoon tea party for a retelling of the family and villa’s history.

Back at the hotel, children (and adults) can learn how to make Italy’s beloved gelato.

Children can personalize their own aprons and chef hats while they learn how to make traditional Italian gelato, cookies, and waffles.

Explorers can also venture into Rome and enjoy the wealth of options available in the city centre. Gladiator school, Italian lessons, and walking tours which span the length of the historic capital.

One recommendation is the ancient street of Via dei Coronari. A photographer’s dream, the street is located in the historic center of Rome, surrounded by ancient mosaics and Roman architecture.

Flanked by buildings from the 15th and the 16th Centuries, the road is one of the most picturesque in the old city, and maintains the character of the Italian Renaissance.

This Swiss resort may hold the secret to living longer