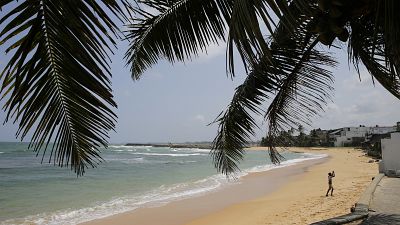 With its endless sandy beaches, Sri Lanka is a tourism hotspot.   -   Copyright  Eranga Jayawardena/Copyright 2019 The Associated Press.
By Euronews  •  Updated: 28/01/2021

After being the epicentre of the coronavirus pandemic at the beginning of the year, China and the rest of Asia have gradually seen daily activity getting back to relative normality. One sector, however, is likely to take longer to recover: the travel industry.

International travel has plummeted, with many border restrictions still in place across the globe. According to the World Tourism Organization, during Q1 of 2020, the pandemic caused a 35% decrease in tourist arrivals in the Asia Pacific region. Looking ahead, it predicts that the crisis could cause a global annual decline of “between 60% and 80%”.

In 2018, about 1.75 million residents from the EU 27 Member States made trips to China, making it the 11th most popular destination outside the EU, according to Eurostat data.

Almost half of those journeys were business-related trips.

Chinese and Asian travel to Europe is another key market.

In 2018, EU hotels and other forms of tourist accommodation recorded nearly 22 million nights spent by tourists in China, which is nearly five times more than figures released 10 years ago, according to Eurostat.

Other Asian tourist hotspots such as Sri Lanka, which boasts endless beaches, have also taken a hard knock from the pandemic.

Tourism created about 500,000 jobs in Sri Lanka and accounts for 5% of GDP. In 2018, there were around 2.3 million international tourist arrivals to the country, said Parami Fernando, head of media and communications at Sri Lanka Tourism.

She added that since April there had been zero international arrivals, which has dealt a blow to the country's economy.

"Sri Lanka tourism has a lot of private-sector establishments, small and medium entrepreneurs, so they are in a grave situation, a really sad situation, at the moment," she told the panel.

"But domestic tourism [to] a certain extent is helping the situation."

With borders for the moment sealed between Europe and most Asian countries and many flights grounded, the aviation and travel industry in China and Asia has had to focus on the travel market at home.

"Our vision is domestic China recovers first and then domestic China [recovers] within bigger markets, such as domestic Europe," said Jie Sun, adding her business had almost recovered fully for the domestic aviation sector.

She said after a COVID-19 vaccine is hopefully discovered, her clients could then cross borders but reestablishing trust for travellers presents another challenge.

In a Euronews Twitter poll, 60% of respondents said they did not feel safe going on a long-haul holiday this summer, which would likely involve air travel.

Just over 26% of people said they would feel safe, and more than 12% said they were not sure.

The dent in confidence to travel can be explained in two ways, said Flor Diaz Pulido, who heads the aviation policy unit at the European Commission.

She told the panel that people are firstly questioning how safe it is to travel right now and then there is "a legitimate fear" by a lot of citizens as to if they would be repatriated in the event of a second coronavirus wave.

"I think it is important that everybody remembers that aviation is the safest mode of transport worldwide, safety is in our [DNA] it is part of what we do every day to ensure our planes are safe," she said.

"European citizens travelling abroad will always be able to come back to the European Union."

She said the EU has published a set of guidelines for safer travel, which include a list of countries that can be visited, as well as recommendations for social distancing.

Diaz Pulido added that it is as safe as it can be to travel during a pandemic, reiterating: "It is safe to travel right now."

"I think it is important to transmit this confidence to the passengers," she said.

You can rewatch the full Euronews debate in the video player above.

The future of water: How can Europe fight the climate crisis?

Euronews Debates: How can digital innovations regenerate a region?