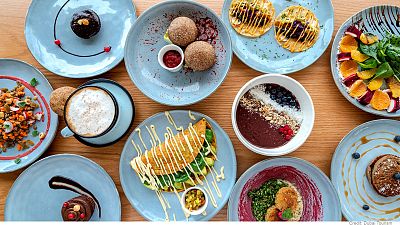 Big cities across the world are embracing a plant-based diet like never before, and Dubai is no different. Over the past year or two, the number of restaurants that have added either vegan options or dedicated menus to their repertoire has exploded. With that, a bevy of new vegan-only spots have opened too. Here’s a selection of the best old and new eateries for those eschewing animal products…

This wellness centre and yoga hub off Jumeirah Beach Road has a fully vegan café in its garden that is a must-visit while you’re in Dubai. It is a pioneer for plant-based cuisine in the country, having been around for five years, and has a laidback, Balinese vibe, with wooden tables and cushions on the floor, both inside and outside. The menu boasts some tasty sugar, gluten and additive-free food, from acai bowls to homemade cashew cheeses. In particular, the cashew tzatziki bowl, eggless omelette and Snickers Pie come highly recommended. There is also a great selection of superfood smoothies, immune-boosting hot drinks and refillable alkaline water available.

This is the new kid on the block and got people talking when it was announced earlier this year it would serve the world’s largest selection of vegan food. Whether or not Veganity has lived up to that promise is hard to verify, but its quirky, bright pink café in City Walk certainly does have a massive collection of great comforting classics. Burgers, shawarmas, pizza, pasta, waffles, chicken drumsticks – you name it, you can probably find it on the exhaustive menu. It’s already pretty popular, so you might have to wait for a table – but it’s worth it.

Also brand-new is Folia, a concept from Saudi Arabia’s Prince Khaled bin Alwaleed bin Talal and celebrated American chef Matthew Kenney, who founded Plant Food + Wine, plus 20 more restaurants across the world. The idea originated in 2018 in Los Angeles, where you can find the menu of raw and plant-based creations across various venues and catering services in the Four Seasons Hotel Los Angeles at Beverly Hills. It arrived in Dubai on World Vegan Day, 1 November, 2019, with a dozen dishes at the Four Seasons Resort Dubai at Jumeirah Beach. They’re served across the resort and, while the weather is cool, on a dedicated fairy-lit terrace near the beach and pool. Dishes range from the super-healthy, such as an incredibly flavourful green gazpacho, to something more substantial, such as cauliflower tacos.

This little gem in Dubai Marina also opened earlier this year, with a focus on healthy but tasty plant-based cuisine. Soul Sante Café was started by self-confessed “fitness freak” and yoga practitioner Manisha Advani, who couldn’t find a dining spot in Dubai that served the kind of vegan food she loved. So she came up with this: a cosy neighbourhood-style café that serves up an eclectic array of food. Think banana protein pancakes and avo on toast for breakfast, pulled jackfruit tacos and beetroot sliders for mains, and peanut butter cup or lemon cookies for dessert. There’s a real effort to use all natural ingredients without any chemicals or additives.

Comfort food is what Gypsy is all about, and it does it very, very well. It has two branches – one in Dubai Marina and another new one in Galeries Lafayette at The Dubai Mall – that both serve impressive dishes cooked to order. This includes the recommended battered banana blossom “fish” and chips, southern fried jackfruit and doner kebab. Not to mention its famous vegan sausage roll. There are lighter options for those looking for something a bit healthier – one of the best being Grandma’s Cypriot lentil soup. It’s all home-style food made with love and passion.

This Parisian export has been incredibly successful in Dubai, thanks to its unique take on health-boosting, plant-based cuisine. There are a number of branches across the country, but the most popular is at Alserkal Avenue, an industrial-looking arts hub that’s worth spending an afternoon looking around. The menu, which has been devised by nutritionists and naturopaths, aims to include as many locally and ethically sourced ingredients as possible, as well as gluten-free food options and organic cold-pressed juices, plus superfood smoothies. It also has a retail section, with items such as teas, T-shirts and tote bags. Hot tip: try the orange blossom pancakes.