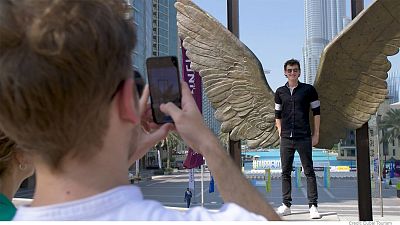 Dubai has been named the 5th most Instagrammed city in the world in a survey by travel site Wego.

From its sweeping beaches, to standout architecture and world class restaurants, there’s a photo opportunity to be found at every landmark and for every occasion.

In fact, food is one of the main reasons for visiting the city.

Dubai led the way in the 'food' category for Instagram hashtags with a massive 26 per cent of all hashtags in or including Dubai also including food.

This summer alone there were 79 million hashtags related to Dubai. Some of the hotspots include the city’s Miracle Garden which is the largest flower garden in the world. It has 72,000 square metres with over 50 million blooming flowers.

As well as the Miracle Garden, downtown Dubai is also home to the Burj Khalifa which is also one of the top five most instagrammed places in the city.

And in the city’s centrally located Zabeel Park you can find Dubai Frame, an architectural landmark. This 150-metre-high, 93-metre-wide structure is positioned so that visitors can soak in the views of modern Dubai to the south and old Dubai to the north.

“Dubai is the one and only Arab city that’s ranked within the top five. That’s a lot for one city compared to very well-established tourism destinations,” he says.

The top city in terms of hashtags was London with 118 million posts. Next was Paris with 101 million, followed by Nice and New York who received 87 million and 83 million respectively.

Sarah Hedley Hymers is a travel journalist and social media influencer. She says putting photos on Instagram is all about social capital.

“You want to present something that is aspirational," she explains. "It has to be well-framed. It has to be colourful – dark pictures don’t do so well on Instagram. So, you’re looking for something that is bright, that really pops and that makes people think ‘urgh, I wish I was there’. It’s the postcard of now!”

The social media app is redefining the travel industry. A number of studies show 'Instagrammability' is a key factor younger travellers - especially millennials - look for when choosing where to go on holiday and spend their money.

Sarah Hedley-Hymers believes millennials are the digital generation. She says they are not just tech- savvy they are tech-dependent.

"They see WiFi as their oxygen, so all of their decisions are formed by the internet and social media, not just where to travel, but what diet to eat etc," she explains. "So it’s not surprising that millennials will look to Instagram. But also, Instagram is hugely functional. It’s so much more functional than print, which is inconvenient to carry, or a website which has corporate functions like booking forms and company bios. It’s picture led and it has concise captions.”

In fact, studies show 41% of people under the age of 33 prioritise 'Instagramability' when selecting their destination. And it’s a market the industry is keen to capitalise on.

“They want places they can basically take with them, put it on social media, share it with friends, keep it as a memory, create their own moment where they feel that they made it and nobody else could make it, " says Mamoun Hmedan. "So, it’s completely different, everything is digital for them obviously That’s the growing sector within the tourism industry in general and it’s going to keep leading the way for at least 20 or 30 years.”

It appears Instagram is the go-to platform to get a snapshot into the life of the hashtag savvy traveller.

9 pieces of vintage furniture to redecorate your home during lockdown