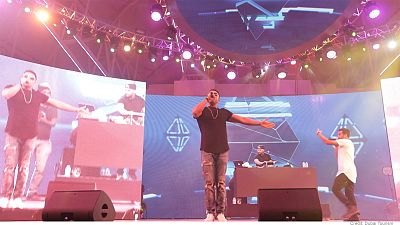 Dubai has welcomed some of the biggest names in the music business in 2019, from Jamiroquai at Dubai Jazz Festival to Fatboy Slim at Party in the Park.

International stars Boyzone performed one of their final ever gigs in the emirate as part of their farewell tour.

One of the most successful bands in Ireland and the UK, the group have five No. 1 albums and have sold over 25 million records.

“It’s been a pleasure to go back to all of the places that you know over the years, we went and promoted in and we did shows in over the years. So, it’s nice to come back and do one more show to say goodbye properly,” says Boyzone singer, Ronan Keating.

“In fairness, this actual venue we’re playing right next to the Irish Village of course- you can’t knock that. It’s an amazing kind of almost an amphitheatre. When you’re on stage it goes up and up and up. It feels the crowd and it’s an amazing space to play. Personally, that’s what I like about playing here," says bandmate, Shane Lynch.

But is it really the end for one of Irelands finest exports?

“This tour has really been received amazingly well," says bandmate Keith Duffy. "The setlist is great. It’s a good show. And you know we’re a boy band and we are in our forties. We got away with it for long enough. We want to write the last chapter ourselves and go out with a bit of credibility and a bit of pride."

Jay Sean at the Global Village

From the Irish Village to the Global Village, New York-based International R&B star Jay Sean performed to a crowd of 100,000 people.

He says performing in Dubai has been instrumental to his career and that the music scene has changed in the city.

“You got to remember the internet wasn’t what it is today. We didn’t have any social media. It was literally through Youtube I guess that I had a fanbase in Dubai," says Sean.

" I didn’t know that my songs were playing here and then I came and got a gig in Dubai and went ‘cool’. The gig was like 5000 people in Dubai and I was like ‘what?!’. And ever since then I’ve been blessed to be able to come here every year for the last 15 years. And they know my whole catalogue."

Maroon 5 at the new Coca-Cola Arena

Maroon 5 were the opening act at the new Coca-Cola Arena. It’s the biggest of its kind in the region and has been described as a gamechanger for the music industry in Dubai.

“As you look around today you’ll see the panelling that is all acoustically driven. To be a music venue sound is critically important and functionality of space as well," says Guy Ngata, CEO of the Coca-Cola arena

Phantom of the Opera at Dubai Opera House

But it’s not just popular music making its mark. The world’s longest-running Broadway musical, ‘The Phantom of the Opera’, has just premiered at Dubai Opera House.

Which is music to the ears for fans across the city where there’s something for all tastes.

Did you know Dubai is fifth most instagrammed city in the world?

Adventures – Explore, dive and discover the sealife in Dubai’s waters