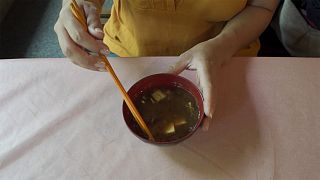 Miso, a fermented soy and rice paste, is found everywhere in Japanese cuisine. It is one of the most important ingredients in Japanese cooking- a delicate seasoning which brings out the best in many dishes. It is found as an accompaniment to almost every meal and is said to aid digestion.

Japan has more than a thousand miso producers. The Nagano mountains in the centre of the country are one of the regions famous for producing the soybean paste.

Kosuke Ishii comes from a long line of miso producers. His ancestors founded the [Ishii Company](Ishii Miso: https://ishiimiso.com/english/guide1.html) in the nineteenth century. Since then, miso has been fermented at his company in cypress casks - a process which can take from one to three years.

The recipe is unchanged: rice, salt, soy, and patience. The powerfully aromatic dough is worked by hand following a centuries-old custom.

"Today, most producers favour quantity and speed," explains Kosuke Ishii. "Our mission is to keep the traditional know-how, preserve the taste, the colour and the smell of the miso in the long-term, to transmit to future generations."

The Nagano prefecture produces nearly half of all Japanese miso. And there are hundreds of varieties.

Sano Miso is said to be the biggest and best miso store in Tokyo. People come from miles around to find their favourite ingredient. The soy bean paste is used in soup, but also as a condiment.

Noriko Sano is a Miso 'sommelier'. She says miso is a part of everyday life for people in Japan.

"For more than 700 years, the Japanese have been drinking miso soup every day," she says. "For the Japanese, miso is also food for the soul."

But why does this ingredient come in so many different colours?

"Japan is a rather long country. In general, miso is darker in the north and lighter in the south," says Noriko Sano. "When the climate is cold, the miso is browner and more salty. While in the south, it is more white and softer."

In Japan, there is a saying: "There is no set time for miso. It's always time to eat." And it's true, miso is the basis of a typical Japanese meal.

"A bowl of rice, miso soup, and some condiments, like these pickled vegetables - called tsukemono. It's really the basic meal," concludes Noriko Sano.

The secrets of shoyu, the one thing you find on every table in Japan

What is soy and is it good for you?