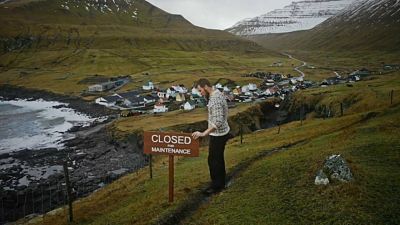 While we are all used to businesses closing for the weekend, a whole country shutting up shop is quite another thing.

This weekend the Faroe Islands in the North Atlantic have announced they are "closed for maintenance".

Euronews' Katy Dartford took a recent trip to the Faroes and shares her experiences on the islands that are back in the news.

But visitors from abroad who are willing to lend a hand are welcome and will even be given free food and accommodation.

Projects will include creating walking paths in well-trodden areas, constructing viewpoints that help preserve nature and birdlife sanctuaries as well as erecting signs that help with wayfinding.

It’s perhaps no surprise that there’s a push for sustainability on the Faroes’ 18 islands.

With tourist numbers now pushing around 60,000 a year and Atlantic Airways launching direct flights from Paris in July, there are fears the remote archipelago could buclke under the strain of the kind of over-tourism that Iceland has seen.

Voted National Geographic Readers’ Choice destination in 2015, dubbed the world’s favourite unspoiled island destination by experts at National Geographic Traveler and called “maybe the most curious place left on Earth” by the New York Times, it's little wonder that the likes of Pamela Anderson, Bryan Adams and John Cleese come to the Faroes to get away from it all.

With a landmass of only 1,399 square kilometres and a population vastly outnumbered by sheep, no one bothers the celebrities, and for many, that’s how they’d like it to remain.

But for others, like Magni Arge, Republican Faroese MP in the Danish Parliament, there is a balance to be had.

He said that in some places, tourists aren’t necessarily welcome. With fears they are hurting nature and affecting daily life — as well as the income they generate being concentrated with only one or two tour operators and a boom in Airbnb rentals — he questions whether there is a better way of doing things;

“It’s pluses and minus, but we need to consider spreading the income so people are happy to see tourists,” he said.

With its treeless mountains that evoke scenes from Lord of the Rings, the islands provide dramatic scenery for the adventurous tourist to enjoy. You can walk along its 340 named peaks, go wild swimming at Leynar beach or wildlife watch along 1,500ft sheer cliffs.

Visitors must be prepared for what the locals call the “changeable” weather: frequent heavy rain (300 days’ worth) and ferocious winds. If a weather window appears, then travelling by helicopter is a popular thing to do and an excellent way to visit the more remote islands such as Vágar.

Luckily, for those attempting weekend clean up, the rain is forecast to be holding off, which will make it significantly easier to clean up the paths, fjords and dramatic basalt crags created some 55 million years ago by volcanic eruptions.

It’s the unforgiving weather however, that has forged an identity and way of life many locals refuse to let go of.

On a hill walk to Kirkjubøur, the cultural “capital” of the islands, I met farmer Jóannes Patursson, who is 17th generation living at the farm, Roykstovan. Part of his home now doubles as a museum.

He told us that pilot whale hunting is still part of their livelihood, but the whales are slowly dying out because of mercury poisoning. “We need to take better care of the environment,“ he said.

The weather also means picturesque turf roofs houses can be seen everywhere, having been built like this for more than a thousand years to provide protection from rain, hurricane force winds and provide insulation.

Another way to experience the traditional Faroese way of life is to take a ferry ride to the island of Sandoy and try out “Heimablídni”, or dining Faroese-style in people’s homes.

After being served tea in a home in the village of Hildigarð I took part in a Faroese chain dance — a tradition that’s survived since the 13th century as a way to keep their language and culture alive.

Based on ballads that were sung while dancing, they were eventually written down for the first time at the beginning of the 19th century.

Our host shows us a book by his father, where he had recorded hundreds of songs as a way of preserving the oral tradition.

We get together in a full circle, join hands and sing – or rather chant - ‘Let me sleep let me rest my head on your arm sweet rich virgin lady'.

And rain is always an excuse for fine dining. Koks, (Faroese for flirt or fusspot) is one of the world’s most remote Michelin-starred restaurants and always keeps an eye on sustainability.

Combining traditional Faroese produce like foraged plants and seaweeds with centuries’ old Faroese cooking methods, such as fermentation, drying, salting and smoking, and adding a twist … like ‘sandwiches’ made from fermented lamb, flaky slices of dried cod skin and salted whale blubber as ‘butter’, or seafood that’s still so alive it’s trying to escape your plate, it's not necessarily for the faint-hearted.

While closing for business may seem an extreme way to manage the ever-increasing flow of visitors to the islands, it’s also a way for volunteers and future visitors to experience the genuine culture of the Faroes and preserve it for the future.

Climb the co-op windmill that powers a Danish community

Pollution puts Faroe Islanders in the spotlight in new documentary