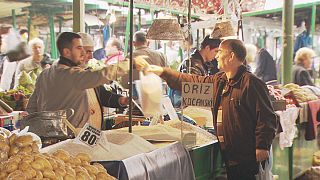 Macedonian cuisine is a colourful fusion of Mediterranean and Middle Eastern influences. Thanks to an abundance of sunshine and fertile soil, the national dishes are rich in flavour and the climate is also perfect for growing the grapes for an array of exquisite wines.

Explore the special dishes being served up in this Balkan country on ‘Macedonian Life’ as we embark on a culinary adventure.

It is busy in the kitchen of one of Skopje’s finest restaurants. Chef Natalie Bojadjievska prepares traditional dishes like the Macedonian Pan, a mix of pork, beef, courgette and eggplant.

She sums up what is so good about the food: “Macedonian cuisine is very simple to prepare, very rich not only in taste and smell but also in colour. Our cuisine is our way of living, you know. It’s not just a meal.”

Over at Alexsandar Palace, head chef Gievski Ljupčo identifies why Macedonian food is so different: “Our cooking is different from those of neighbouring countries because we use more vegetables – both fresh and cooked – and salads and we concentrate more on healthy food.”

Ljupčo has been working as a chef for more than 30 years and is a dedicated ambassador of home-grown gourmet cuisine. On tonight’s menu is a typical dish – stuffed peppers with minced beef.

During the day and out in the streets, locals flock to the Green Bazaars, fresh food markets which exist in every city. They are loved for their locally grown and seasonal foods. An abundance of sunshine and rich, rocky soil create ideal conditions for many different fruits and vegetables.

The influences on Macedonian food come from far and wide. It is a melting pot of cultures which has evolved over the centuries.

Nebojscha Vukovich is the President of the Gastronomy Association. He spoke to us about the formation and origins of the country’s cuisine: “Macedonian cuisine is a mixture of a lot of cultures from people who came from abroad to Macedonia and left their mark, as well as Macedonians who lived abroad and brought back the habits from the culture they had experienced. We can say that countries such as Iran, Iraq, Afghanistan and Pakistan have had a historic impact on our food. In recent times we have been influenced by cuisines such as Austrian, Hungarian, Italian and French.

Cooking together is another big part of the country’s tradition. Feasts at weekend country houses are particularly popular. The Jovanovski family spends every weekend at their getaway near Skopje and their children often stop by with friends.

Nina Jovanovski, an English teacher, told us about the country’s culture of dining in company: “Macedonians often come together at weekend houses. We want to be together and to prepare food of course because Macedonians are usually well known as good eaters.”

But not only does Macedonian cuisine have a rich history, wine too has a long tradition. It dates back to at least Roman times.

The country’s wine heartland is the Tikveš region. Vineyards huddle around the Vardar River, the Popova Kula winery among them. Founder Jordan Trajkov was a banker who visited California’s Napa Valley. It changed his life. The experience inspired him to go back to his roots and to continue the family’s tradition of wine growing.

He planted his first grapes over 10 years ago and takes particular pride in one of the varieties he grows. It is one of the oldest in the world – Stanushina nicknamed ‘Macedonian Girl’.

He told euronews about the difficulties involved in saving the variety: “We saved the Stanushina variety from extinction. It is a local variety, it was a forgotten variety, nobody was producing wine out of it. I went with my father to remote locations, to remote villages into the backyards of old houses, abandoned houses, we took the plants and we planted them there behind us.”

“Our mission is to save the local and regional varieties and to show them to the world, to the wine world.”

From rich flavours to breathtaking monuments: check out the next edition of ‘Macedonian Life’ in which we travel to Ohrid, a UNESCO World Heritage city that lies on the shores of the oldest lake in Europe. We discover Byzantine masterpieces and archaeological treasures that reveal the story of a city rich in history.