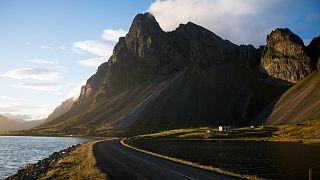 Iceland is kilometres ahead of most other European countries when it comes to EVs. Literally.

The country now has the second-highest market share in the world after Norway, despite the fact that only a few years ago Iceland completely lacked the charging infrastructure necessary to cover the island’s territory and run a significant number of EVs.

In the first half of the year, some 85 per cent of private cars sold in Iceland were plug-ins. The number of electric cars sold on the market on the island has jumped up by 25 per cent this year from 60 per cent of all newly registered vehicles in 2021, and 46 per cent in 2020.

By comparison, the number of electric vehicles in Germany was 13.5 per cent of all newly registered vehicles; in France, it was 12.3 per cent and in the UK it accounted for 16.5 per cent.

Why is Iceland doing so well?

"I think the main reason for the adoption [of EVs] is the incentives that the government gave," Jon Bjorn Skulason, General Manager of Icelandic New Energy, told Euronews Next.

Iceland’s government has made EVs cheaper to own, lowering taxes on CO2-free vehicles, and eventually removing VAT from EVs entirely.

"In addition, everybody knows that the grid in Iceland is completely green. So people realise that we have a fully renewable resource for all the electricity, and it's relatively cheap compared to most other locations," Skulason said.

"So, if you add all of these together, I would say these are the key driving forces that drove the EV adoption to be as fast as it was".

But the true challenge of Iceland’s EV revolution was to change minds and people’s habits in favour of using EVs.

"In 2014, there were under 100 electric vehicles in Iceland. And they were obviously bought by early adopters, people who really like new technology and are not afraid of change," Berglind Rán Ólafsdóttir, CEO of ON Power, the largest clean energy provider in Iceland, told Euronews Next.

"In the beginning, people did not believe in electric vehicles in general," said Skulason.

“People thought it was going to be too complicated, it's going to be too difficult. But when people started to see the EVs on the road, you were hearing stories that these were not breaking down, there was no problem travelling around and getting wherever you wanted,” he added.

"And then all the new models came out in 2017 and 2018, and then it was just a complete overturn, everybody started buying EVs".

Ólafsdóttir’s ON Power took on the project of expanding the EV’s charging infrastructure around the island.

"We wanted to create a platform for our product, which is electricity to be used in transport in Iceland and to develop further," she said.

ON Power decided to set up EV chargers all along the coast of the island, with fast chargers placed 100 kilometres apart. The infrastructure covered every corner of Iceland, even those places people never drove to.

This way, drivers would have no excuse not to use EVs, Ólafsdóttir said.

But there was another obstacle to the spread of EVs among the Icelandic community: many people lacked the space in their homes for their own chargers and parking spots.

ON Power found a solution, teaming up with several municipalities to build shared neighbourhood chargers, available to people living in apartment buildings.

Those who buy their own charging stations get tax rebates from the government.

What has been the impact of this revolution?

Iceland is committed to reducing its CO2 emissions by 55 per cent by 2030 and becoming carbon neutral by 2040 - one of the world’s most ambitious climate goals.

"All the energy we use today, except for transport ships and aeroplanes, is non-fossil fuel. The only way to reach the climate goals is to reduce their consumption of fossil fuel in land, transport, maritime or aviation - that's the only pathway,” Skulason said.

"So if the government's going to reach their goals, they have to push new technologies and green technologies forward for the consumers".

But Iceland’s EV revolution also has some financial advantages.

Skulason said that, while Europe has been struggling with an energy crisis this year, in Iceland, there has been no fuel or energy cost increase.

"The electricity costs exactly the same now as it cost 12 months ago, it's only the gasoline that's gone up. So, EVs owners are saying [owning an EV] is even better now than it was before," he said.

In the long run, Skulason thinks the development of the EV market will make the island self-sufficient in terms of energy.

Iceland might have undergone an EV revolution, but as the rest of Europe and the world lags behind, tourists visiting the country have failed to embrace the island’s new way of travelling.

When Iceland reopened its doors to tourists after the pandemic, the vast majority of international visitors asked to rent traditional gas-fueled vehicles.

"This is something we need to overcome and is actually quite a complex situation because most people have never driven an EV, they're going to an adventurous country and they're supposed to drive on a fuel which they've never used in their life before," said Skulason.

"We need quite a bit of education and outreach towards the people who are coming and making it more like an adventure to try out new technologies".

What can the rest of Europe learn from Iceland’s success?

It should be pointed out that Iceland’s situation is very different from that of other countries in Europe.

"You could say that it’s easier for us than other countries to do this [develop an EV market], for the number of cars we have," Ólafsdóttir said.

Iceland has a total of over 315,000 registered vehicles compared to, for example, Germany’s over 47 million.

The infrastructure to build to develop a national EV market in Iceland is also significantly smaller than the one that would be needed to connect continental Europe.

"I think in Iceland and Norway, where you are also almost on an island, it's simpler to convince people to buy this technology than it might be here in Europe," Skulason said.

The battery range of EVs shortens when people drive above 160 km/h, Skulason noted, and that is a challenge that will need addressing in Europe, as “in the future, we need to power these vehicles with green energy”.

Regulation around EVs is also much different in other European countries.

"For example, I heard that in Germany regulations around equipment and infrastructure are extremely strict and they are creating a lot of cost," said Ólafsdóttir.

"It's important to allow this to develop flexibly and make sensible demands, not to create unnecessary obstacles. Of course, they need to be safe," she added.

Ultimately, the change in habits and attitudes Iceland is experiencing may take a while to reach the continent.

"The infrastructure can be built but it is a different environment; I think it will take quite longer in Europe to adopt than it takes some roads," said Skulason.