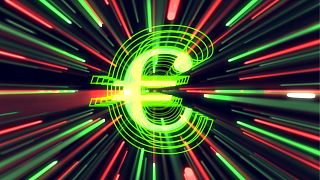 Most central banks don’t want to be left behind by the advances of Bitcoin and other cryptocurrencies.   -   Copyright  Canva
By Euronews  with Reuters  •  Updated: 03/11/2022

France, Singapore and Switzerland have launched a joint trial of their experimental central bank digital currencies (CBDCs) and decentralised finance (DeFi) protocols, in the first cross-regional test of its kind.

The trial, named Project Mariana, explores how financial institutions could settle foreign exchange trades in financial markets using such tools, with the aim to deliver a proof of concept by mid-2023.

It will use so-called automated market makers (AMM) for the cross-border exchange of "hypothetical" Swiss franc, euro and Singapore dollar CBDCs.

AMM protocols are designed to combine pooled liquidity with algorithms to determine the prices between two or more digitally tokenised assets such as currencies.

"In the future, similar AMM protocols could form the basis for a new generation of financial infrastructures facilitating the cross-border exchange of CBDCs," the Bank for International Settlements (BIS), which oversees the project, said in a statement.

"This pioneering project pushes our CBDC research into innovative frontiers, incorporating some of the promising ideas of the DeFi ecosystem" said Cecilia Skingsley, Head of the BIS Innovation Hub.

Around 90 per cent of the world’s central banks, including the US Federal Reserve, the Bank of England and the European Central Bank, are studying the potential launch of a digital version of their currencies.

Most don’t want to be left behind by the advances of Bitcoin and other cryptocurrencies, but are grappling with the complexities they bring, such as wariness about the degree of control they could hand to governments.

'No threat to crypto' says Binance

The CEO of the world's largest crypto exchange, Binance, said the moves made by central banks on CBDCs were not a threat to the crypto industry as they would validate blockchain technology and build trust among sceptics of digital currencies.

"Is it (CBDC) a threat to Binance or other crypto-currencies? I don’t think so. I very much think that the more we have, the better," Changpeng Zhao told Web Summit, Europe's largest tech conference, in Lisbon on Wednesday.

He said the blockchain technology behind cryptocurrencies should be available for CBDCs and adopted by governments.

"It will validate the blockchain concept, so that anybody who still has concerns about the technology, will say: 'OK, our government is using the technology now,'" Zhao said.

"So, all those things are good," he said, adding that CBDCs would still be different from native crypto as "cryptocurrency is a deflationary asset".

Still, he said, recently cryptocurrency has been highly correlated with the stock market, with both assets correcting sharply as central banks hike interest rates to control record inflation.

"In theory, they should be inversely correlated, but today they go the same way, mainly because most of the people who trade on crypto (assets) also trade stocks," he said.

"When the Fed raises interest rates, and the stock market crashes, they want more cash, so they sell crypto. This is because the user base is still very highly correlated," he said.