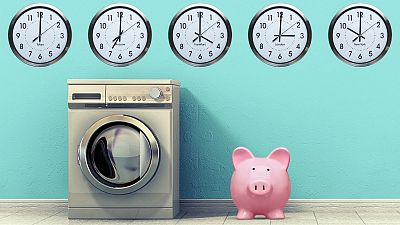 With energy costs shooting up, households are increasingly looking for small ways to reduce their utility bills.

One potential tool is to run your home appliances at specific times of the day when electricity is cheaper - but this depends on your tariff.

There are special tariffs that make it cheaper to use power-guzzling appliances at night than during the day.

Known broadly as “time of use” tariffs, these are specific pricing plans for energy use, aimed at encouraging consumers to use electricity at times when it is more cheaply available.

For example, "Economy 7" energy plans in the United Kingdom allow consumers to get cheaper electricity for seven hours each night.

They make use of special meters to track day and night use separately, charging different rates for electricity used during the day and during the night, with the day rate often being more expensive than day rates on a normal tariff.

The cheaper Economy 7 time period usually runs from either 11 pm to 6 am, 12 am to 7 am or 1 am to 8 am, says price comparison and switching site Uswitch, but this varies according to where you live and your energy supplier.

There are also "Economy 10" plans that are similar to Economy 7 plans but also give you three additional off-peak hours.

Sounds great. Should I get one?

These sorts of tariffs can sound great, but whether to switch to one really depends on your electricity usage.

Uswitch recommends that as a general rule, someone would need to use more than 40 per cent of their electricity at night to make an Economy 7 plan cost-effective.

You’ll also need to be disciplined about how you use your appliances, examine whether you can realistically run them overnight, and think about whether your lifestyle can incorporate this sort of energy plan.

For example, winter months might disrupt your schedule more, as you might have to put the heating on earlier.

Specific plans could have higher standing charges for using energy outside your designated off-peak hours, meaning that you could end up paying more than you should.

You should also be aware that appliances should generally not be left running unattended overnight, as this could pose a fire risk.

It’s also always a good idea to check that your smoke detector or fire alarm is functioning properly.

Uswitch basically concludes that if you use electricity in the same way as the average household, then an Economy 7 plan would probably be more expensive than if you were on any other electricity tariff - but it could be worth thinking about if you have electric storage heaters.

How are European countries helping people pay their energy bills?