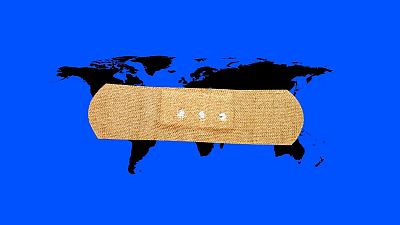 Most people in the world hate their job, especially their boss, according to a 2019 global poll conducted by Gallup, the US analytics and consulting company.

The statistic is staggering, but if you could put things into perspective, you would feel much better.

If you look at hard facts, work-life balance is much better than it used to be.

Back in 2017, a psychologist and American best-selling author by the name of Steven Pinker gave a TED talk discussing how the world was getting better in areas spanning from homicide to health, and defying the "intellectuals who detest progress".

The Euronews Next team, among the four million people who watched that TED Talk, was impressed by the progress data quoted by Pinker, so we decided to see if what he said still rang true in 2022, examining one of the major indicators of well-being - health.

Following the huge interest of our readers in the article we published on how well-being indicators show overwhelming progress, we decided to give the figures another look; this time we looked into the hard data of the world of work, another key factor for our happiness.

We will be looking at figures from Our World in Data, a respected and transparent scientific online publication based at the University of Oxford that focuses on quantifying and analysing data about global problems.

On average, we spend 30 per cent of our lives at work, according to data from Sodexo, a French management company. That's about 90,000 hours at work over a lifetime.

Is that discouraging? It shouldn't be – workers have a lot of leverage in 2022 and things are much better than they used to be.

Over the past two centuries, great strides in access to education have given people around the world a very special power: literacy.

UNESCO, the United Nations' cultural agency, defines literacy as "the ability to both read and write a short, simple statement about one’s own life".

Literacy is nowadays the most essential skill to find a job, as well as one of the key measures of a population’s education.

And although it might seem quite basic, until the Middle Ages, being able to read and write was everything but basic, and rather a great privilege reserved for a very small minority who held power.

According to the United Nations, what changed the course of the history of knowing how to read and write, turning it into a common power among the people, was the advent of books.

As textbooks increasingly became mass-produced, the ability to read and write gradually became a fundamental skill in the Western world.

This is evidenced when we look at the data showing how global literacy levels dramatically improved over the last two centuries – so much, in fact, that the figures have been reversed: While only 12 per cent of the people in the world could read and write in 1820, today only 14 per cent cannot.

Of course, despite the fact that today most of the world is literate, there are still many challenges ahead – especially for the world's poorest countries, where still large sections of the population are illiterate.

However, these figures are going up even in countries like Niger. The global literacy rate has more than doubled since 1960, to 86 per cent in 2015, according to World Bank and OECD data.

In 1870, only one in four people in the world attended school and just one in five could read. Today, figures show that global literacy and schooling rates are over 80 per cent, and geographical disparities - although still present - have been greatly reduced.

Europeans were the ones to pioneer the expansion of basic education. But global literacy rates only really began to improve during the second half of the 20th century when the right to education became a global priority, explains Adam Szirmai, author of the book 'The Dynamics of Socio-Economic Development'.

Many nations of the world gained between 40 and 50 percentage points in literacy during this period, according to Our World in Data.

Literacy rates in Latin America, for example, one of the most unequal regions on the planet, have increased dramatically in the last century. North Africa and the Middle East, similarly, have drastically improved literacy in just one generation.

It is also worth noting a trend that might initially strike some as negative, but that actually suggests a great deal of progress.

In low-income countries, there is a considerable difference in literacy rates between generations. Younger people have a higher literacy rate than the elders, which infers a positive trend: Over the years, the literacy rate of the general population will continue to increase.

In most countries in the world, even the poorest ones, basic education is nowadays regarded as a right, but also as a duty: Governments guarantee access to basic public education, while for individuals it is mandatory to attend school until they reach a basic level of education.

That's fair, you might say. But this was not always the case.

The Internet has also played a big role in global education

The graph below shows the proportion of people who use the Internet.

Although Internet usage rates are much lower in the developing world, they are on the rise.

The Internet has been arguably one of the most transformative and fastest-growing technologies of our time, says Max Roser, a researcher at the University of Oxford and the founder and editor of Our World in Data.

And yes, it’s true much of the world is still not connected, but Roser says that "the Internet story has only just begun" and, at current rates, many will be experiencing it for the first time soon.

Here’s also a graphic on the evolution of mobile cellular subscriptions, worth looking at given how phones have represented a turning point for the Internet boom.

It may not feel like it, but we’re working less

Thanks to data, we can also learn about another big positive change in the way we work.

Stress has now become a huge buzzword. We feel it, we dread it, we use it to show that we are busy and overworked, but are we really overworked?

The answer is no – at least not if we look at the number of hours we work and how they compare to how much previous generations worked.

In many countries around the world, people work much less today than they did 150 years ago, and figures show that today we have far more time to engage in activities outside of work, such as leisure, learning new skills (to perhaps change jobs), or maybe even running a side business.

Working hours have significantly declined, especially for workers in countries that had early industrialised economies, such as France, Belgium, the UK, and Germany.

Fast forward to today, these extreme working hours have been roughly cut by half.

Even in countries where weekly working hours have not declined substantially, economist Dora Costa – in a paper analysing historical US data – explains that other benefits that did not exist before, such as vacation, sick days, personal leave, or early retirement, have continued to reduce our time at work.

Charlie Giattino and Esteban Ortiz-Ospina, editors of the section on the evolution of work in Our World in Data, explain that measuring the evolution of working hours accurately is difficult because surveys and historical records have limitations, "but for any given country, the changes across time are much larger than the error margins at any point in time: The average worker in a rich country today really does work many fewer hours than the average worker 150 years ago".

There are also more women in the workforce

Although economic inequalities between men and women remain common and significant, they are much narrower today than they were just a few decades ago.

Bear in mind that many women only gained the right to vote in the second half of the 20th century. In Switzerland, for example, it was only in 1971, when (male) voters approved the right of Swiss women to vote and stand for election.

The increase in female participation in society and especially in the workforce has been one of the most remarkable economic developments of the 20th century.

In most countries, across all income levels, women's participation in labour markets is higher today than it was several decades ago.

Another interesting fact: According to Our World in Data, most of the growth in women's participation in labour markets over the last century is specifically traceable to an increase in the participation of married women.

In other words, many married women have gone from being "only" wives and mothers to being – on top of everything else – that colleague smashing it in the workplace.