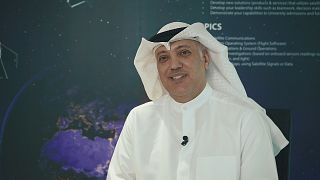 Bassam Alfeeli and Nada AlShammari are business partners in Orbital Space, a start-up that offers students and technology enthusiasts the opportunity to develop and test software code on satellites in space, through their ground station in Dubai Silicon Oasis.

Converging arts and sciences in space

After finishing his engineering education in the USA, Bassam returned back to Dubai and witnessed the launch of Mohammed bin Rashid Space Centre and the UAE Space Agency. This inspired him to pursue his long-awaited dream of taking a part in space missions, and he established Orbital Space together with Nada. Nada is an educator, and she believes that the converging arts and sciences will work together to innovate the space sector.

For their first mission to space, the two combined their backgrounds and developed a unique concept. “We decided to create competitions, and it was open to all students who wanted to propose a science experiment that was going to be sent to space”, Bassam told Euronews.

E.coli study was the starting point

They decided on a project that proposed to study the behaviour of a genetically modified E. coli bacteria in space. They worked together with the students for a year and finally sent the payload to the International Space Station. “This experience was really wonderful for the students and a successful starting point for us to think about what else is possible,” said Nada.

The ground station makes it possible for students to develop, propose and submit software code to the satellite

In 2021, Orbital Space sent a CubeSat, a square-shaped miniature satellite, to space. Later, they built a ground station in Dubai Technology Entrepreneur Campus  where they receive signals from this satellite. “The ground station makes it possible for students to develop, propose and submit software code to the satellite”, Nada says.

Having the support of Mohammed bin Rashid Space Centre and Dubai Silicon Oasis, Orbital Space is now planning its next interactions with space. “Our next missions will be to the moon”, Bassam added.

Linda Mahoney Founder and partner of BetterHomes in Dubai