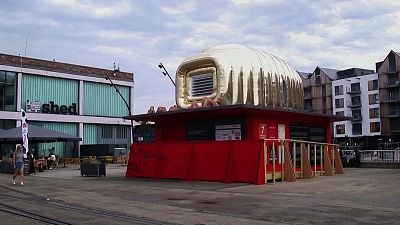 Image shows an Inflatable House. Its designers say the structure has been built to withstand the harsh environment on planet Mars.   -   Copyright  Reuters   -
By Roselyne Min and Reuters  •  Updated: 20/08/2022

On the Bristol waterfront, a two-storey 53-square-metre house with an inflatable roof catches passers-by's eyes.

"This is a place for people to think about future living and how the scenario of life on Mars relates to their lives on Earth," explained Ella Good, an artist behind the Building A Martian House project.

The public art project explores what a house on Mars could be like, and aims to help us reassess how we live on Earth.

"On Mars, you’d have to live in a really small, resourceful community. You’d have to fix everything when it breaks, you’d have to really consider every aspect of your daily life. So it’s a place for thinking about all of those questions," Good said.

Along with fellow artist, Nicki Kent, she collaborated with scientists and architects to build a sustainable house.

Hugh Broughton, the principal architect on the project and designer of the British Antarctic Survey's Halley VI Research Station, says he sees parallels between the Mars house and his previous projects in Antarctica.

"There are many similar kinds of features because for much of the year in Antarctica it's really hard to get outside. You have to make the most of every square metre of building," explained Broughton.

The prototype of the Martian house is powered by solar panels and designed to cope with average temperatures of -63 degrees Celsius.

The inflatable structure above ground is built to protect residents from harmful radiation and cosmic rays.

Inside, the living room is filled with hydroponic plants (those that are cultivated without soil and little water) to aid relaxation and support a healthy diet.

On Mars, the structure’s underground level would house the environmental control room with all the life support systems powering the house, two compact bedroom "pods," along with a shower, and a low-water "Martian loo" designed by the winners of NASA's Lunar Loo competition.

The public art project will open to the public from the end of August until the end of October.