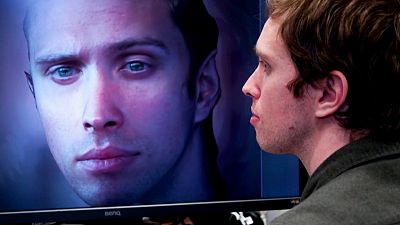 Lumirithmic, a london-based startup from the Imperial College London, has developed a low-cost 3D face capture technology using AI for use in the metaverse   -   Copyright  Reuters
By Roselyne Min and Reuters  •  Updated: 18/08/2022

We may soon be able to bring our real faces with us into the virtual spaces.

Instead of existing cartoon-like ones, realistic avatars created by face capture technology will step into the virtual shopping malls, and represent us at job interviews or conferences.

"Tomorrow's metaverse will really also be about serious work... where you really need to project your real self and not your cartoon self. And this is where we believe completely realistic avatars are going to be the game changer," said Abhijeet Ghosh, a co-founder of Lumirithmic and professor at Imperial College London.

So, how does it work? Lumirithmic’s AI-powered software creates ultra-realistic Hollywood-style 3D renderings of a person's face using a simple setup with off-the-shelf devices.

"We have a semicircular arrangement of eight tablets and seven iPhones... the iPhones are recording the facial appearance as these tablets illuminate with our specially designed lighting conditions," explained Ghosh.

Ghosh believes companies in the virtual reality (VR) industry couldnt quite get over the “uncanny valley of human perception” and therefore traditional avatars were deliberately designed to be cartoon-like.

"The closer you get to reality, if you don't nail it, human perception rejects that avatar. So it's almost better for the consumer, for traditional avatars to be non-realistic and cartoonish,” said Ghosh.

“And hence for us, one of the big goals has been to really cross that uncanny valley to total realism, where basically now you accept it because it really represents you”.