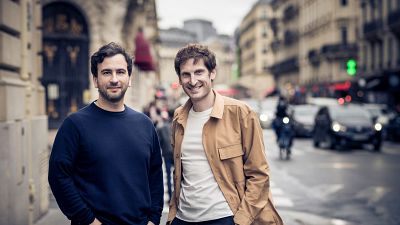 The French business banking start-up Qonto began with humble beginnings in 2017 with the aim of making banking easier for freelancers and Small and Medium-sized Enterprises (SMEs).

In five short years, it reached unicorn status with a valuation of $5 billion (€4.4 billion) and has become a European champion.

With offices in France, Italy, Spain, and Germany, the company is growing its presence in Berlin, and on Friday announced a deal to acquire the German fintech giant Penta which is expected to close in the next few weeks.

Qonto’s long-term ambition is to become the finance solution of choice for one million European SMEs and freelancers by 2025.

Euronews Next spoke with Qonto’s co-founder and CEO Alexandre Prot to find out how it plans to lead Europe’s fintech market, the role of cryptocurrencies and the future of challenger banks.

The main issues Prot found with traditional banking were the apps were not easy to use so much so that it was “painful” to request a statement, it was not easy to organise your company’s finances, such as paying employees, and customer support could take days for an answer.

“As any small business owner or founder, we struggled every day with banking and managing our finances as a small business,” he said.

He and his business partner Steve Anavi said they really wanted to build that solution that they “really would have loved to have ourselves in the first place”. So they did, by launching Qonto in France.

The company aims to solve all those problems with better customer service and offers a no strings attached policy so you can cancel your account with a couple of clicks on your computer.

It’s not that we necessarily want to push crypto, it’s more that we have some clients that are asking for it.

Most importantly, Qonto aims to be transparent in its fees so does not have hidden costs or have a transfer commission, which many traditional banks do.

But Qonto has also expanded beyond the simple bank account and you can also use its services to simplify bookkeeping and accounting.

“A good chunk of what we do is also new services that make it easier for small business owners or medium business owners to manage the companies,” he said, adding that traditional banks do not offer these services.

“The trend is, of course, that new players will have a larger share of the pie. But I would say that the pie is also growing,” he added.

Another service Qonto is offering is the opportunity to invest in cryptocurrency assets.

In June, the company joined forces with the Paris-bassed European crypto bank Coinhouse, though the reason for this partnership has nothing to do with being French tech allies.

“It’s not that we necessarily want to push crypto, it’s more that we have some clients that are asking for it,” said Prot, adding the company wants to offer many financial services under one roof so it’s more efficient for the user.

While he admits there are risks in investing in cryptos, he said the tech behind cryptos - blockchain - is innovative and could be used by fintech companies for some security and risk aspects.

But what Prot is more excited about in the short term is conquering Europe’s fintech scene and the acquisition of the Berlin-based giant Penta will play a big part in that.

The question is how we keep on growing fast and making sure we remain number one with an even larger market share or position.

“Germany is the largest market in our industry in Europe, very much linked to the size of the economy and the GDP,” he said.

“It's super important for us to be very strong in Germany if we want to be really the leader in Europe”.

Prot said the deal will add another 50,000 clients to its current base of 250,000 freelancers and SMEs across its European markets.

While he says “never say never” to looking to create markets outside of Europe, he notes the goal is to become an “even stronger European champion” and is therefore not looking at what other American fintech players are doing.

“Right now, the challenge is that in a way we're probably the number one in our segment,” he said.

“The question is how we keep on growing fast and making sure we remain number one with an even larger market share or position”.

One of the ways to achieve that and continue on its path of growth is to ensure each of its markets in France, Spain, Italy and Germany each have a tailored product suited to the different country's needs.

In the end, everything we're doing is thanks to the team.

But the success of Qonto is not just down to the product, which Prot says he has never doubted because he knew it was something business owners and freelancers would need.

Instead, it is all to do with the team. Qonto’s employees have grown to almost 1,000 in just a few short years and aims to have double that by 2025.

One of the main challenges is how you structure the team, if you are hiring the right people, and giving them the necessary training he said to ensure the “work culture is strong” and employees “work well together”.

There are four corporate values that the company lives by, which are: ambition, teamwork, mastery and integrity, Prot said.

“For each of these words or these values, we really put a lot of energy and money to make sure we can work well as a team because, in the end, everything we're doing is thanks to the team”.

Fintech - Will it replace traditional banks?