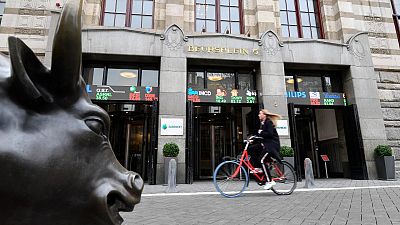 Technology companies and start-ups may fear so-called stagflation, rising prices and interest rates just now, but the pan-European stock exchange Euronext says the situation is not as bleak as feared.

“The big difference between the situation that we are facing today and the situation we're facing 10 years ago or so is that the quality of European technology companies is extremely good,” said Euronext’s CEO & Chairman of the Managing Board Stephane Boujnah.

While he admitted that companies may have a smaller valuation due to the current economic climate, he told Euronews Next at the International Financial Forum in Paris that he was “extremely confident about the outlook” of Europe’s tech companies.

He explained that over the past 15 years there has been consistent progress in high-quality technology projects that have been properly seeded, properly funded by venture capitalists, and developed by private equity funds.

Euronext is so confident in the bloc’s tech companies that in June, it launched a new technology initiative called Tech Leaders in a bid to compete with Nasdaq and help the sector's companies gain more visibility across the continent's asset managers and other investors.

One of the reasons for its creation is so that companies registered across European member countries can identify as part of a collective group of European tech leaders, irrespective of location.

Boujnah said another reason for the creation of Tech Leaders is so that specialised asset managers and tech funds can identify European tech companies as a group of homogeneous technology players.

While the United States has the strongest tech scene with giants such as Amazon and Google, we should not discount Europe, says Boujnah, who believes it has strong research, academia, blue chip and companies.

“People do save much more in Europe and therefore feed the pipe of equity, much more in Europe than in the US, where people borrow and use debt even if they have to save for the sake of their pensions. So this continent has huge strengths,” he said.

Some of its “structural weaknesses” he said are that European markets are more fragmented than the US. While he is not quite so sure that Europe could create its own Godzilla companies there are “many very material niche markets that are very big that allow European companies to be global peers,” he said.

One of those niche markets is fintech, especially payment systems, which Europe has raised several big names including Klarna and Revolut. But the other big player will be deep tech, predicts Boujnah.

“I do believe that in the semiconductors, in the telecom equipment, in the software side of the universe, above and beyond the usual buzzwords like that.

“And the European deep tech technology skills and assets are going to make the difference in the years to come”.

French start-ups are optimistic despite the economic gloom. Here’s why