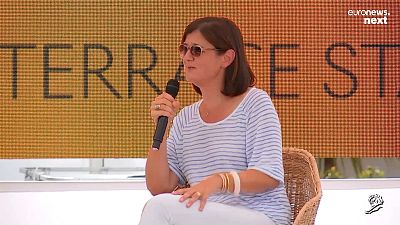 Agathe Bousquet has been a force for change in the public relations and communication industry, rising through the ranks in France to lead one of the most well-known agencies in the world.

In an ever-shifting world, it’s perhaps important, now more than ever, to continue to push for progress.

She spoke to Euronews Next at the 2022 Cannes Lions Festival of Creativity about the power of creative communication in the transition to a greener economy, as well as the importance of diversity in the industry.

So, what advice did Bousquet have when it comes to growing the pool of female business leaders and creatives?

“You can’t be what you can’t see” so the saying goes. And whilst French companies have come a long way in promoting more women into leadership positions, more needs to be done to build greater representation across professional networks and adjacent roles in the ecosystem, Bousquet says.

“When I look at France, at the biggest agencies or the groups, they are women, but we have to continue to push, especially on the creative side and also in terms of production. We need to push that because at the end, it's always the same networks,” she said.

Male leaders also play an important role in identifying and nurturing talent with Bousquet crediting her success to the support of male mentors and managers throughout her career.

“Today and even in other agencies, I was really, really supported by men. You cannot do your career if you're a woman and becoming a leader. If you have only women helping you know,” she added.

Detail in the data

Actions speak louder than words yet sometimes, the loudest voice is the one that is promoted to a new position - even when they are not necessarily the best person for the job.

Traditionally men are more likely to ask for a promotion or a raise compared with women, so to ensure the right decisions are made, it's necessary to look at results in order to make objective decisions rather than basing it on personality, according to Bousquet.

Having strong mentors as well as internal sponsors that can push females higher up the ladder was a common sentiment echoed by the other female Changemakers at this year’s event.

Finding the right boss is an important decision and can have a big impact on a career so find one, “that will follow you and the one that is not afraid of you,” said Bousquet.

“Because you need a boss that will even think that maybe one day you will be better than he is or than she is - and that is really part of being a great, great boss”.

'Every organisation is evolving': How the corporate world is changing

New technologies are reshaping how we shop