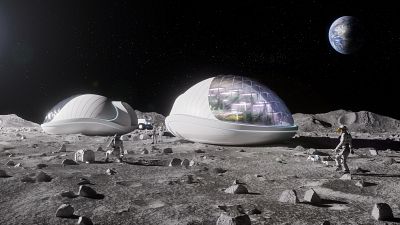 These biopods are growing plants sustainably and could help us live in space one day   -   Copyright  Interstellar Labs
By Pascale Davies  •  Updated: 30/06/2022

Inventing the technology and tools to help save the planet is no easy feat but the Green Tech scene is gaining ground in its efforts to build the sustainable solutions of tomorrow.

Europe is a global leader in green innovation, with companies in the EU surpassing those in the United States in terms of green investment and digital adoption by green firms, according to the European Investment Bank.

Sustainability and Green Tech may be the latest industry buzzwords, but nevertheless, it must be noted it is just one possible tool to help save the planet and not the solution.

That lies with businesses and governments who will have to redefine ecosystems to make them sustainable.

Here Euronews Next takes a look at some of the smartest start-ups that are trying to secure a greener and more sustainable future; from a wireless solution to charging electric vehicles (EVs) to a safe way to produce nuclear energy and technology that is literally out of this world.

A safe way for nuclear

The German start-up Marvel Fusion may not have a prototype yet but it has big ideas to create clean energy safely without emitting carbon dioxide.

The company is developing a way to recreate nuclear fusion on Earth, which can provide almost limitless energy with zero carbon emissions.

Unlike nuclear fission, which is used today, fusion is safe and does not leave behind long-lasting radioactive nuclear waste.

“You can produce a gigawatt, which is like a big power plant the size of a football field. You can use it to produce electricity for cities and so on,” Heike Freund, chief operation officer at Marvel Fusion, told Euronews Next.

She said it could also be “promising” to use alongside renewable energies such as solar and wind, which are not always that reliable as they depend on the weather.

While other nuclear fusion technologies are already in the works, this three-year-old start-up is a departure from them.

The company is pursuing an innovative approach using lasers instead of magnets. The lasers compress the fuel to cause fusion, rather than using magnets to hold the plasma until a reaction occurs.

While there are other companies using laser technology, Marel Fusion is pursuing indirect laser fusion, which requires less energy.

“We are trying to make fusion work with totally different technology and we are using very short, pulsed, high intense lasers and then shooting with the lasers on the nanostructured fusion. And that is very novel,” said Freund.

As Europe tries to wean itself off Russian gas and look for alternatives, nuclear fusion could be a cleaner answer.

“I truly believe that we need fusion in Europe. I think the past months have shown us how important energy serenity is,” Freud said.

“Currently, we are not able to produce the electricity we need in Europe, but we are importing energy sources from outside of Europe. And I think we should have a true interest as Europeans to be leading this field”.

It is a long journey until fusion could be used to produce energy.

There have been some scientific breakthroughs but no one has yet reached that point where they got more energy out than they put in, Freund said.

“I'm very confident that in the next two to five years we will see somebody achieving this. The next step would then be to build prototype power plants and I'm hoping that we will see a commercial power plant on a grid ten years from now,” she said.

France is making a key play for its green start-ups.

At this year’s Viva Technology event in Paris, President Emmanuel Macron set an ambitious target of having 100 unicorns by 2030, a quarter of which would be green start-ups.

Euronews Next spoke to two exciting French Green Tech start-ups at the event, including Interstellar Labs.The French-American start-up is launching a pod that creates the ideal climatic and atmospheric conditions for growing plants on Earth but also in space.

The technology is able to grow crops but thanks to its dome shape and water system, it is also able to reduce water and energy consumption while boosting yield.

“The plan is really to optimise how we use the collaboration between nature, technology and humans on Earth. We need to feed a lot of humans and we are consuming a lot of resources. So we are creating the system so we can optimise the growth of specific plants that are used in food production,” Interstellar Lab CEO and founder Barbara Belvisi told Euronews Next.

“I don't want people to live in bubbles on Earth. I want us to grow efficiently, plants and foods inside, bubbles that are really optimising, not using too much water, too much resources,” she said.

Its so-called BioPod is currently available to purchase for life on Earth and has other potentially life-saving projects, such as being able to try to grow a plant that could be a treatment for cancer.

The start-up also has contracts with NASA to work on the adoption of the pods in a lunar environment to see if the technology could work in space, and another to build a small food production system for the International Space Station (ISS).

But Belvisi stresses the plan is not to invade space.

“When it comes to space, the plan is really to bring life with us. We are not into ‘let's conquer space’ and have humans everywhere,” she said.

“It's more about let's help the biodiversity that we have on Earth expand in the solar system and expand in space so in the far, far future when humans are going to be a spacefaring civilisation we have with us all the beautiful biodiversity of our planet and we're taking it with us”.

Another French start-up is trying to find a solution to the world’s unstainable food supply and land shortage.

Kyanos has devised a microalgae production process that makes a vegetal protein that is good for the planet and humans.

The process works by growing microalgae in water; the plant also removes CO2 from the atmosphere. The microalgae is then combined with other microorganisms. No pesticides or antibiotics are used in the process.

The process does not require land or nitrogenous fertilizers that can produce nitrous oxide, which is even worse than CO2. And as an added bonus, the microalgae is full of health benefits, such as dopamine which can boost your mood.

For the moment, the product is available to purchase as a supplement but the company has high hopes for it.

“In the future, food will have different sources of proteins, including micro-algae. We have been working with different labs to get it into the food and make it something that will naturally enter the food,” Kyanos CEO Vinh Ly told Euronews Next.

Electric vehicles have been hailed as one tool to help shape a greener future but building the infrastructure to charge them has caused setbacks.

Wireless charging could fix that problem though.

The Israeli start-up Electreon has built the technology to charge EVs without the bulky machinery. Instead, you can charge your vehicle on the road while driving or heavy-duty vehicles could charge at stationary charging stations.

The company recently launched a successful trial of its Electric Road System (ERS) in Italy, where an IVECO bus and Stellantis’s Fiat Nuova 500 passenger vehicle could charge while driving.

“Imagine that you are travelling from Lyon to Paris or a journey that takes a few hours. If you will drive on an electric road, actually you have unlimited range and you can drive for infinity” Oren Ezer, co-founder and CEO of Electreon, told Euronews Next.

Another benefit, he said, is that cities would not have to build regular EV chargers, which can be big and would ‘not have a nice visual impact” in cities such as Paris.

Even if we stop emitting CO2 today and reach the ambitious climate goals set by governments, there is the underlying issues of the CO2 that is already in the atmosphere which will not disappear overnight.

The United Nations’s Intergovernmental Panel on Climate Change ( IPCC) estimates that direct air capture and storage needs to remove up to 310 billion tons of CO2 by 2100 in order to limit global warming to 1.5°C with no or limited overshoot.

This is where carbon capture technology comes in.

Though a lot of it is in early-stage development, one Swiss start-up is showing promising results.

Climeworks capture carbon dioxide directly from the air by using a technology called “direct air capture” (DAC). The removed air is then combined with underground storage and the CO2 emissions can no longer contribute to climate change.

The start-up is the only DAC company to have a large commercial facility.

In September 2021, it began operations in Iceland and turns CO2 into stone. The company also prides itself on being a renewable company.

“Climeworks’ carbon dioxide removal service is the purest on the market: we exclusively use renewable energy or energy-from-waste to power our plants and our air-captured CO2 will never be used to extract fossil fuels,” a spokesperson told Euronews Next.

“Climeworks’ plants are designed for modular and rapid scale-up with a magnitude of 5-10x in the years to come, and we strengthen our leadership with every new plant we build”.