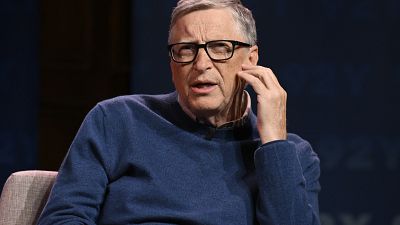 Bill Gates used to be the world’s richest person before he was toppled by Elon Musk. Despite having had the title in common, the two men do not get on.

The Microsoft co-founder has now said he had reservations about Musk’s motive for buying Twitter, due to social media platforms' role in spreading misinformation.

“He [Musk] actually could make it worse. It’s not totally clear what he is going to do,” Gates told the Wall Street Journal’s CEO Council Summit on Wednesday.

Musk, the CEO of Tesla and SpaceX, has said that following his planned $44 billion (€41.05 billion) purchase of Twitter, he is “against censorship that goes far beyond law” and will reform what he believes to be overzealous moderation of tweets.

During the start of the COVID-19 pandemic, Musk also made a series of false claims on Twitter. He first called COVID-19 “dumb” and falsely claims that children are "essentially immune" to the virus.

He also falsely claimed on Twitter that the malaria drug chloroquine could be a possible COVID-19 treatment.

“How does he feel about something [on Twitter] that says ‘vaccines kill people’ or that ‘Bill Gates is tracking people?’″ Gates asked.

“What are his goals for what it ends up being? Does that match this idea of less extreme falsehoods spreading so quickly [and] weird conspiracy theories? Does he share that goal or not?” Gates said.

Despite Gates’s doubts over Musk’s motivations, he admitted that the Tesla CEO’s track record is impressive and that he had done a good job of hiring talent for his companies.

He also called his endeavours at SpaceX and Tesla “mind-blowing”.

But Gates said he doubts if the Tesla and SpaceX CEO will be able to accomplish the same feats on Twitter.

“I kind of doubt that will happen this time, but we should have an open mind and never underestimate Elon,” Gates said.

What’s the drama with Musk and Gates?

Several weeks ago, Musk accused Gates of short-selling shares in Tesla stock, a way to make money by betting a company will lose value.

At the time, Musk had tweeted rude insults at Gates and argued that shorting Tesla undermines Gate’s environmental philanthropy.

"There's no need for him to be nice to me," Gates said on Wednesday.

When asked whether he had bet against Tesla, Gates replied: "That has nothing to do with climate change. I have ways of diversifying".

Musk threatens to walk away from Twitter deal over fake accounts