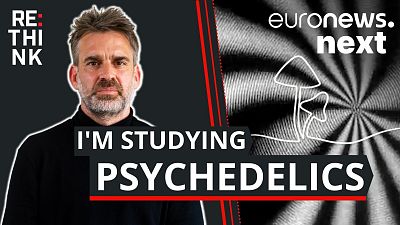 More than a third of patients suffering from mental health issues do not respond to treatments that are currently available. But psychedelics could be the therapeutic saviour to a health crisis impacting millions worldwide.

Substances such as ketamine, LSD and psilocybin work by producing non-ordinary states of consciousness and are currently being tested by researchers to see if they could be an effective treatment alongside psychotherapy for mental health issues.

“It's not that there necessarily is something wrong with the current treatments, but they are limited (…) and up to more than a third of people do not respond at all to the current treatments available,” said Dr David Erritzoe, Clinical Director of the Centre for Psychedelic Research at the Imperial College London.

He and his team are investigating the potential benefits of using psychedelics in the treatment of patients with mental illness.

The World Health Organization (WHO) has reported an increase in mental health disorders over the last 10 years worldwide.

These disorders affect 84 million people in the EU countries and cost the member states around €600 billion per year.

The origin of psychedelics

The term psychedelic is derived from the Greek psyché meaning “soul or mind” and dēloun meaning “to make visible” or “to reveal”. It could therefore be literally translated as revealing the soul or opening the mind.

It includes compounds that can alter cognitive processes and produce hallucinogenic effects.

They can come from nature like psilocybin, which is found in magic mushrooms but can also be synthesised in a lab. The best known is LSD, which was created by Swiss chemist Albert Hofmann in 1938.

Psychedelics have been part of human culture for a long time. There are traces of psilocybin use in cave paintings in North Africa dating from 7000 BC and indigenous people in the Amazon basin have been using Ayahuasca, a psychoactive drink in shamanic ceremonies, since 900 BC.

A new era in psychedelic medicine

The study of psychedelics as a treatment option for mental health is not new.

Starting in the 1950s, LSD was looked at for its potential therapeutic effects in the United States and Europe.

“At that point, 40,000 patients had been treated with psychedelic intervention. In the 60s, there had been 1,000 scientific publications, mainly looking really quite promising,” said Erritzoe.

But it all came to a halt in 1970 after the Controlled Substances Act became law in the US and placed substances into one of five schedules depending on their medical use, the potential for abuse and safety or dependence liability.

40,000 patients had been treated with psychedelic intervention.

Psychedelics like LSD were placed in schedule 1 which regroups the drugs that aren’t accepted for medical use and with a high potential for abuse.

Due to the classification, the National Institute of Mental Health (NIMH), the main agency providing grants for research on psychedelics, stopped funding all research into the psychedelic compounds therapeutic potential.

The studies resumed in the past decade and an indicator of the change of attitude toward the use of psychedelics for mental health treatments is visible through the regulatory bodies such as the FDA in the US, the MHRA in the UK and the EMA in Europe.

The FDA, for example, granted the status of breakthrough therapy for MDMA-assisted psychotherapy in 2017.

Are psychedelics better and will they replace the current treatments?

Erritzoe insists that we can’t say psychedelics are better than the current treatments but also mention the limitation of what is actually offered to the patient.

The hope is that psychedelic treatments will be available for people who are suffering even in public health systems.

“They [current treatments] were developed and introduced in the 80s. And since then, most of what has been introduced for depression, anxiety, eating disorders, post-traumatic stress and a range of conditions in mental health, have just been reformulation over the same recipe with minor modifications of these compounds,” he said.

One of the important points for him is also to be sure the treatments that are developed end up being accessible to the largest number of patients and for that to happen, they need to be part of the public health system.

“More and more compounds are being tested these years, and the hope is that they will be available for people who are suffering even in public health systems. So it's not going to be just expensive private clinic work, but actually be really available for the people who really need it and might not be able to afford it,” Erritzoe said.

But even if the results of Erritzoe’s studies look promising, he’s careful not to prematurely jump to any conclusion. He’s keen to stress that they’re still in a testing phase and more has to be done before opening these treatments to the public.

“Before it should be available, we need to see the end of these phase III trials, that it really does work well enough and it is safe enough. Before that, it would be wrong for me as a medic to sit and say, I want these treatments out. I want to see the results first. But so far we have a lot of results already. They are very promising,” he said.

How designing for the marginalised can lead to better cities