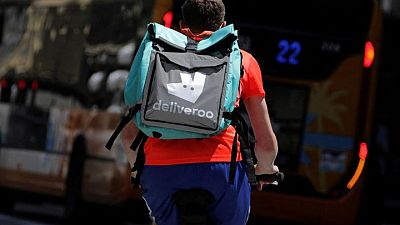 Food delivery platform Deliveroo has been fined €375,000 in France after a court found it guilty of improperly treating its delivery workers as independent contractors.

Two former bosses of the company's French division were also given suspended one-year prison sentences and fined €30,000 by the Judicial Court of Paris on Tuesday. A third former manager received a €10,000 fine and a four-month suspended sentence.

Deliveroo was found guilty on charges of unreported employment dating back to 2015 when it launched its food delivery app in France.

Prosecutors had requested the maximum possible fine of €375,000, arguing the company was responsible for the "systematic misrepresentation" of its non-salaried delivery jobs.

"Deliveroo is responsible for the exploitation and misuse of employment law," prosecutor Céline Ducournau told the court, adding that the "fraud" it had committed was motivated purely by saving money.

The company must display the ruling on its French website for one month, the court also said.

Shares in Deliveroo, which have lost more than 70 per cent of their value since the company's March 2021 IPO, were trading down 6.5 per cent on Tuesday.

​Deliveroo said in a statement that it "categorically contests" the French court's ruling and was considering whether to appeal. It will continue to operate in France, it added.

Its statement said the court decision referred to an early version of its operating model and had no consequences for the way it operates today.

"Our model has since evolved in order to be more in line with the expectations of our delivery partners, who want to remain independent ...Deliveroo will continue to operate with a model that offers these independent providers a flexible and well-paid business," the company said.

Former riders have sued Deliveroo for alleged abuse of their freelance status and claim the company should have hired them as employees.