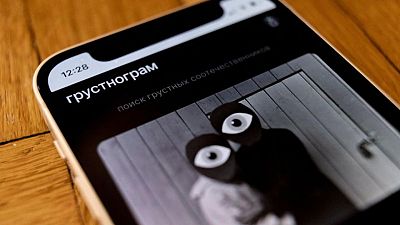 A web page of the social network 'Grustnogram' is seen on a smartphone in this illustration taken on March 30, 2022.   -   Copyright  REUTERS/REUTERS PHOTOGRAPHER/Illustration
By Reuters  •  Updated: 30/03/2022

A black and white, melancholy alternative to Instagram that asks users to post sad pictures of themselves may launch in Russia this week, its creators said, to express sadness at the loss of popular services such as the US photo-sharing platform.

Russia restricted access to Instagram from March 14 and subsequently found its owner Meta Platforms guilty of "extremist activities", as Moscow battles to control information flows with Big Tech after it sent tens of thousands of troops into Ukraine on February 24.

Instagram said the decision to block it would affect 80 million users in Russia.

Broken hearts instead of likes

Although people can still sometimes access the photo-sharing platform using a Virtual Private Network, domestic alternatives have started appearing, the latest being "Grustnogram," or "Sadgram" in English.

"Post sad pictures of yourself, show this to your sad friends, be sad together," a message on the platform's website read.

An image of the app's planned user interface showed a woman in a fur coat standing in front of St Basil's Cathedral on Moscow's Red Square. The search bar tells users to search for sad compatriots.

Instead of Instagram's heart-shaped 'like' button, Grustnogram offers a broken heart and the option to 'be sad'.

"We are very sad that many high quality and popular services are stopping their work in Russia for various reasons," Afisha Daily quoted Alexander Tokarev, one of the service's founders as saying.

"We created Grustnogram to grieve about this together and support each other".

Tokarev said four people, including two freelance programmers, were behind the project, and said he expected the application to appear on Google Play by the end of the week, and later on the App Store.

Rossgram, an imitation of Instagram in name, design and colour scheme, was set to launch this week, but its founders only succeeded in publishing a video of a prototype hours after the scheduled launch time.

Electric vans are 25% cheaper to run than diesel, study finds