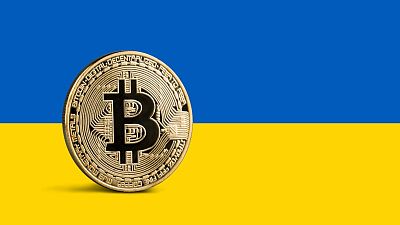 Crypto donations have poured into Ukraine since Russia invaded and have been used to fund its military.   -   Copyright  Canva   -
By Euronews and AP  •  Updated: 28/03/2022

Ukraine, which has waged a staunch defense against Russian invasion, says it has pioneered a new source of financial support: people around the world who have donated millions of dollars directly to its war effort via cryptocurrencies such as Bitcoin.

Since February 26, when Ukrainian officials began tweeting calls for cryptocurrency donations, the Ukrainian government says it has taken in more than $60 million (€55 million) of its $200 million (€182 million) goal as of March 23.

Ukraine has spent about $34 million (€31 million) of the funds received as of last week, converting about 80 per cent to traditional currencies and using the remainder with merchants that already accept cryptocurrencies, Bornyakov said in response to emailed questions from the Associated Press.

The funds raised in cryptocurrency are a just small part of the overall donations that Ukraine has received.

After raising as much as $12 million (€11 million) on March 2, cryptocurrency donations have tapered off although boosters say the unexpected initial surge may inspire other efforts to solicit cryptocurrencies for humanitarian or defensive purposes.

Officials have said that the speed with which they can use cryptocurrency donations has made them useful.

Crypto as a magnet for scams

The downside of that ease of transfer, of course, is that cryptocurrencies continue to be a magnet for scams and are the currency of choice for criminal networks.

We've never seen a sovereign nation fund their defense efforts in crypto before. It does prove out a lot of the crypto argument.

On Tuesday, European Central Bank head Christine Lagarde warned that crypto assets "are being used as a way to try to circumvent the sanctions" against Russia, but didn't provide details beyond noting that global transfers of rubles into cryptocurrency are rising sharply in volume.

Michael Chobanian, the founder of a Ukrainian cryptocurrency exchange, is one of several people helping the Ukrainian government manage the donations through an informal agreement, Bornyakov confirmed.

"We are buying so much stuff that is saving lives every single day and also are stopping the aggression, so it’s a beginning of the new world," Chobanian said in a voice message sent via the app Telegram.

Chobanian said he was not receiving payment for his work but acknowledged that some of the funds are being converted through his cryptocurrency exchange Kuna.

"We’ve never seen a sovereign nation fund their defense efforts in crypto before. It does prove out a lot of the crypto argument".

That argument is that cryptocurrencies allow for the unfettered sending and receiving of value across borders via networks that can't easily be censored or shut down because there is no single entity in charge.

Proponents also argue that cryptocurrency doesn't require users to trust financial institutions because the system is managed by code that anyone can inspect and transactions are written indelibly into distributed public digital ledgers known as blockchains.

The donations to Ukraine are a stress test of sorts for those claims, some of which have fared better than others.

For example, services like cryptocurrency exchanges do act as gatekeepers in part because many are required to collect identifying information about the people who use their services.

Two large cryptocurrency exchanges, Binance and CoinBase, took action to limit the use of some of their services in Russia earlier this month, although they have not withdrawn entirely.

The publicity around Ukraine's call for donations also attracted scammers who tried to capitalise on the good will of donors.

'Who is receiving the crypto?'

Hilary Allen, a professor at American University’s law school who has written a book about the risks cryptocurrencies pose to financial systems, said anyone who donates should carefully look at all the actors involved.

Ukraine is using every penny, every chance to support people, to support the army, so this is not a time when Ukraine can choose a lot.

Many of the donations to Ukraine’s accounts are verifiable on public tools that track cryptocurrency transactions – as are the transfers that are made out of the accounts Ukraine controls.

Tuan Phan, a cybersecurity professional who specialises in blockchain forensics, examined the flow of money to and from some of Ukraine’s accounts in part because he wanted to make a donation himself.

Born in Vietnam, he said he was eight years old when North Vietnamese Communist forces took Saigon in 1975.

"I’m old enough to remember what happened, so I’m very empathetic to the Ukrainians," Phan said.

"I wanted to make sure the address where I’m sending my donation is landing in the right places. There are lots of scams going on, so you have to be extra careful".

Even if some of the funds donated were gained through illicit activity, he said, "I think comparing the risks and benefits for Ukraine now - Ukraine is using every penny, every chance to support people, to support the army, so this is not a time when Ukraine can choose a lot".

Being transparent through regulations

In total, cryptocurrency donations so far equal around 1 per cent of Ukraine’s annual pre-war defense budget, according to a Congressional Research Service report updated in January.

Ukraine's government is also receiving aid through multiple other channels, although not all of those flow directly to the government.

The European Union has pledged €500 million toward the humanitarian response as well as additional funds to support Ukraine's budget.

Afian, the Ukrainian attorney, was involved with drafting the legislation and argued that Ukraine was on its way to becoming more welcoming to cryptocurrency.

The donations so far, he added, can "make governments see that working with crypto can be official and can be transparent and well run".