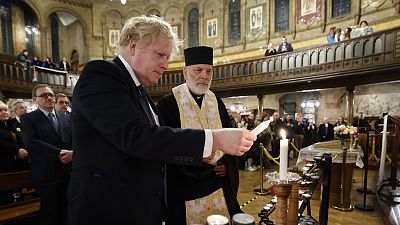 Boris Johnson lights a candle during a visit to the Ukrainian Catholic Eparchy of Holy Family of London, Sunday February 27, 2022, following the Russian invasion of Ukraine.   -   Copyright  Jamie Lorriman/Pool via AP
By Euronews and Reuters  •  Updated: 28/02/2022

Britain will intensify a crackdown on what prime minister Boris Johnson called "dirty money" by introducing the government's Economic Crime Bill to parliament on Monday, a step brought forward in response to Russia's invasion of Ukraine.

The much-delayed legislation comes as many opposition lawmakers and those in the governing Conservative party have called on Johnson's government to do more to stop the flow of Russian cash into London, dubbed by some as "Londongrad".

"There is no place for 'dirty money' in the UK. We are going faster and harder to tear back the facade that those supporting [Russian president Vladimir] Putin's campaign of destruction have been hiding behind for so long," Johnson said.

"Those backing Putin have been put on notice: there will be nowhere to hide your ill-gotten gains," he said in a statement.

Earlier measures have done little to dissuade many Russian oligarchs from using London as their Western capital of choice to spend large sums on property, education, and luxury goods.

The government said the new bill would help the National Crime Agency prevent foreign owners from laundering their money in British property and to ensure more "corrupt oligarchs" could be handed an Unexplained Wealth Order (UWOs).

Those orders, introduced in 2018 to help authorities target the illicit wealth of foreign officials suspected of corruption and those involved in serious crime, have rarely been used because of the often high legal costs.

New laws will introduce a Register of Overseas Entities, requiring anonymous foreign owners of property in Britain to reveal their real identities.

Those entities which do not declare their beneficial owner will face restrictions on selling their property and those who break the rules could face up to five years in prison, the government said.

UWOs will also be reformed to prevent people from hiding behind shell companies, hand law enforcement agencies more time to review material, and to protect them from substantial legal costs if cases are unsuccessful.

Included in the legislation is a move to allow the Register of Overseas Entities to apply retrospectively to property bought by overseas owners up to 20 years ago in England and Wales and since December 2014 in Scotland, it added.