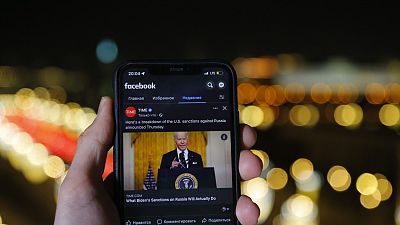 Meta said it is barring Russian state media from running ads or monetising on its platform anywhere in the world, the parent company of social media giant Facebook said on Friday.

"These changes have already begun rolling out and will continue into the weekend.

"We are now prohibiting Russian state media from running ads or monetizing on our platform anywhere in the world," he added.

Moscow accused Facebook of censorship of Russian media on Friday and said it would be partially limiting access to the social media platform, the latest in a series of steps against US social media giants and announced a day after Russia invaded Ukraine.

Russia has been trying to exert tighter control over the Internet and Big Tech for years, something critics say threatens individual and corporate freedom, and is part of a wider crackdown against outspoken opponents of the Kremlin.

Facebook has been a key platform to voice dissent in Russia, and the move to limit it also comes as police crackdown on anti-war street protests in cities across the country.

Meta's Head of Global Affairs, Nick Clegg, said in a statement on Twitter: "Yesterday, Russian authorities ordered us to stop the independent fact-checking and labeling of content posted to Facebook by four Russian state-owned media organizations. We refused. As a result, they have announced they will be restricting the use of our services".

Russian authorities ordered us to stop the independent fact-checking and labeling of content posted to Facebook by four Russian state-owned media organizations. We refused.

Meta, which has long been under pressure to combat misinformation, partners with outside fact-checkers, including Reuters, which assess some content for veracity. Meta says that content rated false, altered or partly false is shown to fewer users.

Clegg said "ordinary Russians" were using Meta's apps to "express themselves and organize for action" and that the company wanted them to continue to do so.

Facebook, YouTube, and others have a duty to ensure their social media platforms are not misused by Russia and Russia-linked entities, U.S. Senator Mark Warner said in a letter to the companies' chief executive officers.

Each company has "a clear responsibility to ensure that your products are not used to facilitate human rights abuses, undermine humanitarian and emergency service responses, or advance harmful disinformation," he said.

Alphabet Inc's Google said it has removed hundreds of YouTube channels and thousands of videos over the last few days for violating its policies and was continuing to look for and disrupt disinformation campaigns and hacking. Google is also evaluating what any new sanctions and export controls could mean for the company, said spokeswoman Ivy Choi.

It was not immediately clear what Russia's restrictions on Facebook would involve.

Last year, Moscow slowed down the speed of Twitter in a punitive move.

"In accordance with the decision of the General Prosecutor's Office, starting from February 25, partial access restrictions are being imposed by Roskomnadzor on the Facebook social network," the regulator, Roskomnadzor, said in a statement.

Moscow has also increased pressure on domestic media, threatening to block reports that contain what it describes as "false information" regarding its military operation in Ukraine, where Russian missiles were pounding Kyiv and families cowered in shelters.

Meta has already irked Russia's authorities. Moscow routinely fines the company small sums for what it says is a failure to delete illegal content quickly enough.

In December, it issued a much bigger fine of 2 billion roubles (€21 million) for what it described as a repeated failure to delete content. It has also fined Google, Twitter, and TikTok.