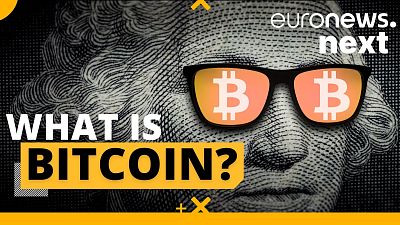 A person holds a visual representation of the digital cryptocurrency Bitcoin, at the "Bitcoin Change" shop in the Israeli city of Tel Aviv.   -   Copyright  euronews
By Aisling Ní Chúláin  •  Updated: 15/02/2022

Ever looked at the headlines, scratched your head, and wondered what Bitcoin and cryptocurrency actually are? We've got you covered.

So, what are cryptos?

Bitcoin is the name of the original cryptocurrency. It was designed to allow users to make digital payments without relying on financial institutions like banks. This also means its users can send or receive money anonymously.

Bitcoin is built on a publicly distributed digital ledger known as the blockchain. This allows a record of all transactions to be compiled and shared across a peer-to-peer network. The same ledger protects the system from the problem of "double spending," which is the risk that a digital token or a digital coin can be spent twice.

Under the bitcoin protocol, every ten minutes a "block" of all the transactions carried out on the network in the preceding ten minutes is compiled and verified through what is known as ‘Proof of Work’ mining.

The idea behind proof of work is to make the network more secure and protect it from attacks, spammers, or individuals gaming the system.

Meta’s Whatsapp trials crypto payments in the US