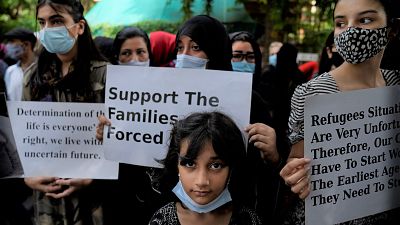 Airbnb has announced it will help house 20,000 refugees from Afghanistan who are fleeing the country after the Taliban took power earlier this month.

The home sharing company said the bill for housing the refugees in Airbnb rentals around the world would be picked up by its donation-funded charity arm, Airbnb.org, and Airbnb CEO Brian Chesky.

A company spokesperson told Euronews Next that while all housing provided would be temporary, Airbnb.org was "committed to supporting refugees for as long as needed, for any length of stay".

"While we will be paying for these stays, we could not do this without the generosity of our Hosts," Chesky said on Twitter.

Airbnb hosts are able to sign up to the programme, which sees them offer places to stay at discounted rates that are paid for by the company's charity.

The displacement and resettlement of Afghan refugees in the US and elsewhere is one of the biggest humanitarian crises of our time. We feel a responsibility to step up.

Stays organised through Airbnb.org are subject to the same requirements as commercial rentals, the company said. These include "accurately representing your listing and availability, as well as providing a safe, secure, and clean space for guests".

Half a million Afghans flee homes

The UN Refugee Agency said last month that an estimated 270,000 Afghans had been newly displaced inside the country since January – primarily due to insecurity and violence – bringing the total uprooted population to over 3.5 million.

That figure jumped 53 per cent in August, according to refugee charity the International Rescue Committee (IRC), which said the number of people displaced by conflict in Afghanistan this year had climbed from 360,000 to 550,000 in just two weeks.

Last week, Airbnb announced it would fund up to 1,000 places for Afghan refugees in the United States, working in collaboration with charities HIAS, the IRC and Church World Service.

"Airbnb.org will closely collaborate with resettlement agencies and partners to go where the need goes, and evolve this initiative and our support as necessary," the company said.

Facebook 'banned' the Taliban from WhatsApp. They kept using it