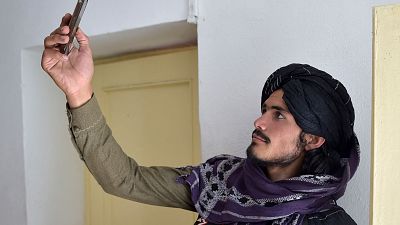 The Taliban have used social media as a communication tool throughout their campaign to take control of Afghanistan   -   Copyright  AFP
By Tom Bateman  •  Updated: 27/08/2021

The Taliban's rapid takeover in Afghanistan shocked international observers and left social media companies struggling to respond to a group that some governments around the world — including the United States — say is a terrorist organisation.

On Tuesday, Facebook told Euronews Next its ban on the group was put in place long before the Taliban's rapid advance and capture of the Afghan capital Kabul.

However, multiple reports indicate that the Taliban has been using Facebook's end-to-end encrypted messaging service WhatsApp to communicate as recently as this week, despite Facebook's claims it is barring its accounts.

WhatsApp told Euronews Next that it could not read users' messages and relied on automation and user reports to identify Taliban-affiliated accounts and content.

Last week, a Taliban commander reportedly told Radio Free Europe's Dari service via WhatsApp that the group had no plans to take Kabul by force.

As the Taliban took power in Kabul on Sunday, it set up a WhatsApp helpline for the city's residents, enabling them to report violence, looting or other problems directly to the group's Complaints Commission.

Later on Tuesday, the Financial Times reported that the Taliban complaints hotline had been blocked by Facebook, along with other official Taliban channels.

The Taliban's continued use of WhatsApp is a potential problem for US-based Facebook, as sanctions law obliges it to prevent proscribed groups from using its services.

"The Taliban is sanctioned as a terrorist organisation under US law and we have banned them from our services under our Dangerous Organisation policies," a Facebook spokesperson said.

"This means we remove accounts maintained by or on behalf of the Taliban and prohibit praise, support, and representation of them".

Facebook also said it had a "dedicated team of Afghanistan experts" monitoring content posted in the local Dari and Pashto languages.

A WhatsApp spokesperson told Euronews Next that the company relied on machine learning and user reports in order to identify Taliban-linked accounts, but emphasised that "as a private messaging service, we do not have access to the contents of people's personal chats".

Alphabet-owned YouTube also announced its own "long held" policy of banning Taliban-linked accounts on Tuesday, while a Twitter spokesperson told Reuters that the company would review content that may violate its rules, specifically against the glorification of violence or platform manipulation.

The spokesperson did not answer questions on whether Twitter has any particular restrictions on the Taliban as a group or how it classifies violent organisations.

Taliban leaders have amassed hundreds of thousands of followers on Twitter, which they use to communicate official statements in multiple languages.