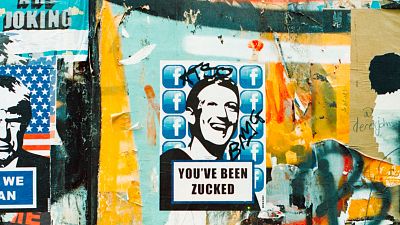 Facebook has come under fire from US officials after closing the accounts of disinformation researchers   -   Copyright  Annie Spratt / Unsplash
By Tom Bateman  •  Updated: 09/08/2021

A US government official has criticised Facebook over the social network's decision to suspend the accounts of two academics researching the spread of disinformation on the platform.

Researchers Laura Edelson and Damon McCoy from New York University (NYU) were conducting a study on the spread of false information through political advertising on Facebook.

In a letter to Facebook CEO Mark Zuckerberg, Samuel Levine, the acting director of the Federal Trade Commission (FTC), said he was "disappointed" by the way Facebook had handled the matter.

The social media giant said it suspended the NYU researchers in order to protect the privacy of its service users, arguing that a data-scraping tool they used violated its terms of use policy.

Edelson and McCoy said the company was simply trying to suppress "unflattering" information.

The FTC - the US’ consumer rights body - pushed back on Facebook's claim that the closure of Edelson and McCoy's accounts had been done in order to comply with a 2019 FTC ruling on social media privacy – a claim it has since retracted.

"The FTC received no notice that Facebook would be publicly invoking our consent decree to justify terminating academic research earlier this week," Levine wrote in his letter to Zuckerberg.

"Had you honoured your commitment to contact us in advance, we would have pointed out that the consent decree does not bar Facebook from creating exceptions for good-faith research in the public interest,” he added.

"We hope that the company is not invoking privacy – much less the FTC consent order – as a pretext to advance other aims".

Legislators from the United States' Senate have also condemned Facebook's decision to cut the researchers off.

Minnesota Democrat Amy Klobuchar said she was troubled by Facebook shutting down researcher access to political advertising data, saying it "has shown that the company continues to sell millions of dollars’ worth of political ads without proper disclosures".

Fellow Democrat Mark Warner of Virginia said tech platforms should “work with, and better empower, independent researchers” but instead the company has “seemingly done the opposite".

What were the researchers doing?

In October last year, just two weeks before the 2020 US Presidential Election, the company sent the pair a cease-and desist letter demanding that they stop using their data collection tool, Ad Observer, and take down previously-published research carried out using the tool.

Ad Observer is a web browser extension that users can opt to download from the project's website. It gathers the adverts a user is shown while browsing Facebook and YouTube and places them in a public database.

According to the Ad Observer website, the extension does not collect any personal identifiers like names or account numbers, and does not record whether or not a user interacted with an advert.

"Over the last several years, we’ve used this access to uncover systemic flaws in the Facebook Ad Library, to identify misinformation in political ads, including many sowing distrust in our election system, and to study Facebook’s apparent amplification of partisan misinformation," Edelson said in a statement.

The company also claimed that the tool had scraped "usernames, ads, links to user profiles and ‘Why am I seeing this ad?’ information," as well as data from Facebook users who had not installed it.

In a blog posted on the company's website, Facebook product management director Mike Clark said the company had offered the Edelson and McCoy data from its own research platform as an alternative.

"The researchers had the opportunity to use the data set, which is designed to be privacy-protective, instead of relying on scraping, but they declined," Clark wrote.

For Edelson and McCoy, as well as researchers working on other projects that relied on Ad Observer data – including some concerning COVID-19 vaccine disinformation – the decision is a harsh one.

"If this episode demonstrates anything it’s that Facebook should not have veto power over who is allowed to study them," Edelson said.