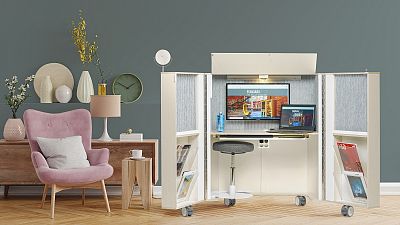 Finland has long been an advocate for flexible working, even before the COVID-19 pandemic forced companies around the world to adapt their work cultures.

It’s perhaps one of the reasons why the Nordic country has consistently found itself topping the UN’s annual World Happiness Report.

While the key barometers for the survey include GDP per capita, life expectancy, and levels of corruption, part of Finns’ general happiness is in leading more introverted lives. It’s little wonder in a country where a common saying is "Silence is gold, talking is silver".

Perhaps this explains why Finland has become such fertile ground for experimenting with remote working and home office design.

From the earliest days of the pandemic, workers have had to adapt to living and working in the same space.

For those without a dedicated office space in their home, kitchen tables and even ironing boards - in the first days at least - were pressed into service as office desks.

In Finland, however, the transition to remote working has been eased with the help of ingenious interior design.

While its Nordic neighbours Sweden and Denmark have cornered the market for affordable Scandi design, Finland remains an outlier for innovation.

Happy for the likes of Swedish flatpack pioneers Ikea to hog the limelight, Finnish design is nonetheless a multi-billion-euro industry, turning over €3.2 billion a year in 2017. While computer gaming design accounts for some of this, the bulk - some 90 per cent - is attributed to furniture design and manufacture.

As well as contributing to the sector’s burgeoning success, Finnish furniture designer Antti Evävaara is also at the forefront of changing attitudes to working from home.

One way he is doing this, of course, is through pursuing designs for the offices of the future - in our living rooms.

In today's world, we are constantly surrounded by irritants and noise that can make it hard to focus on something.

Made of wood and lined with felt, Evävaara’s sshhh3 workstation folds up to look like a cabinet.

Delivered in one piece, it is mounted on lockable castors so it can be easily repositioned around the house.

Besides coming in three colours to match your décor, Evävaara’s office on wheels also comes with built-in sockets, a USB port, power cable, LED light and a stool. Above all, it is designed to help block out surrounding noise.

"In today's world, we are constantly surrounded by irritants and noise that can make it hard to focus on something. Our products aim to create a quiet, personal space that allows you to focus," said Evävaara.

The sshhh 3 home office wasn’t an overnight success, however. Having had the basic design drawn up as early as 2004, it took the coronavirus pandemic to really drive demand for it.

Evävaara has form when it comes to anticipating needs before the need arises.

"It has happened to me before that I have noticed my products have been a step ahead. This was not the first product where I was waiting 10 years until my product took off," the designer told Euronews.

"I designed the sshhh 5 chair in 2002 and it was not commercial until 10 years later. Sshhh 3 I had already thought before the pandemic to take it back into production, but the pandemic accelerated the matter".

While the sshhh 3 pre-dated the remote working trend, the sshhh 7 was only designed this year after seeing the limitations of working people working in limited spaces in their homes.

"I was inspired to create a product which fits in small apartments, places," said Evävaara.

As well as having similar features to the sshhh 3, the subsequent static version is designed to fold away with space for a monitor, papers and magazines. It’s also lockable for security.

As well as his home office creations, Evävaara’s designs have primarily been focused on revolutionising the workplace.

But it was the early embracing of flexible working that really set the seal on the country’s progressive outlook on work life.

For nearly 30 years, Finland has influenced workplace culture beyond its borders, particularly when it comes to trying to strike an even balance between home and work life.

Despite being a country of 5.5 million people, the sparsely populated forests of Finland are home to some of the world’s biggest tech companies.

In order to attract and retain talent, as well as reap the benefits of increased worker productivity, Finnish companies have baked trust more and more into their work culture.

It has also been underpinned by successive Finnish governments implementing legislation that facilitates flexibility, starting with the Working Hours Act 1996.

For the first time, Finns had the right to adjust their working day by up to three hours earlier or later as they saw fit.

By 2011, 92 per cent of Finnish companies offered flexible working hours. At the time, the country was at the vanguard for offering the most robust flexible arrangements in the world, according to the survey carried out by accounting firm Grant Thornton International.

The introduction of a new Working Hours Act had already been slated to come into force on January 1, 2020, when the first cases of coronavirus in China were making headlines.

What was seen as a forward-thinking law has now arguably set the benchmark for other countries in the EU to follow in the post-pandemic era.

Giving more autonomy to workers over their time, Finns can now decide whether to spend up to half of their 40-hour working week outside of the office; be it at home, their summer cottage, a local café and so on.

The new law also capped working hours at a maximum of 48 hours a week - including overtime. Coupled together, the law’s provisions aim to provide a healthier work-life balance, giving workers more time to travel, take care of their children or even exercise more to make the most of often limited daylight hours.

While remote working was initially necessitated by the pandemic, for Evävaara, the trend of teleworking is here to stay.

"I definitely believe it is. In Finland, some companies have already made changes in the post-pandemic period so that teleworking becomes a new normal, especially in some lines of business," he told Euronews.