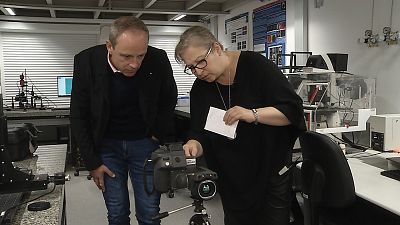 A new breast cancer therapy that promises to destroy tumours inside the body has been developed in Wrocław in Poland.

The technology, called Nanocargo, could eliminate the need for painful surgery - and it has already won the EU's top Innovation Radar Prize.

For this episode of Futuris, we went to meet the team behind it.

The therapy is known as Nanocargo and involves injecting nanoparticles directly into a tumour.

Dr Joanna Bauer is the head of the team behind it at Wrocław University of Science and Technology, developed in an EU project.

She took us into the lab there and explained to us how the tests have been perfectly effective: "We see cancer cells here. The green ones are the cells we want to kill. They are all alive for now. You can see here that after 20 minutes there are fewer and fewer of these living cells that we want to kill. And finally, after 30 minutes, with the application of our nanoparticles, we have no more living cells at all," she said.

An experiment with a vial containing thousands of nanoparticles allows us to see some of the effect of this new treatment. Inside the body, the nanoparticles would be heated by both the laser and a magnetic field. It is the heat that is kills the cancer cells. At the same time, chemotherapy drugs are released from the nanoparticles right inside the tumour.

"So we have a core which is magnetic and it reacts with the magnetic field. Outside there is an additional metallic shell which is excited with the laser. On top of that we have also attached the dedicated drug, which is used during regular breast cancer chemotherapy," Dr Bauer explained.

How is Nanocargo being received?

Oncologist Rafał Matkowski now has the opportunity to use chemotherapy, radiotherapy and hormone therapy to treat breast cancer.

He welcomes Nanocargo as a technology for the future: "Of course, I think that doctors will still have work to do, because, until now, no medicine, no substance, no therapeutic method has been 100% effective," he said.

We also spoke to breast cancer survivor, Agata Gwadera-Urlep, to hear her view on the new therapy. She told us that any innovation is a boost, even if it's not yet available: "The mere awareness that there may be something new helps with the treatment because this mental attitude is extremely important during illness. It's a boost," she said.

Nanocargo was co-created by Indian scientist Dr Nanasaheb Thorat, a Marie Sklodowska-Curie fellow at the Wrocław University of Science and Technology.

Together with his Polish colleagues he was awarded the EU's Innovation Radar Prize for the research, which he hopes will fundamentally change cancer therapy.

"Existing cancer therapy is not targeted, drugs going everywhere in the body. Our approach is very specific, targeted, and only targeting the tumour, not the other parts of the body," Dr Thorat explained.

"The Innovation Radar Prize gives me a great opportunity and proud moment to transfer the basic science, or my ideas, into the real world technologies."

For Joanna Bauer the prize is a significant boost for a promising new therapy: "We are delighted with the great appreciation of our work, but above all we are delighted that this technology we have developed can help women in the future. This is the most important thing for us," she added.

For now, the team is back in the lab, working to define the perfect dose of Nanocargo to treat different kinds of tumours and minimise side-effects before moving on to clinical trials.

Dr Thorat interview location by permission of The Ashmolean Museum, University of Oxford.

How COVID-19 has caused deadly delays to diagnosing cancer