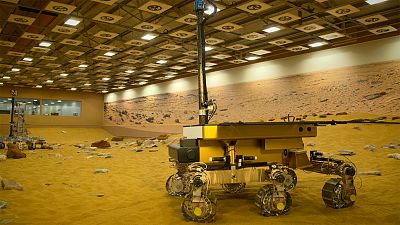 ExoMars is the first mission to head to the red planet to seek signs of life, now or in the past. It's a massive scientific and technical challenge, and Euronews meets some of the team involved in this joint ESA-Roscosmos project in this month's edition of Space.

We begin in the 'Mars yard' at Airbus, in Stevenage near London. The specially-built terrain serves to develop semi-autonomous navigation software for the six-wheeled rover. The sand is super-dry, like on Mars, and the rocks are selected to pose a challenge to the rover, and teach it to avoid obstacles that it can't climb over.

Paul Meacham, Lead Systems Engineer at Airbus, introduces us to one of the test-bed rovers, Bruno.

"Bruno is pretty much the same as the ExoMars rover will look like. He has got on him all the sensors and the actuators you use to drive the rover by itself, starting with these two cameras at the top of the mast - they allow the rover to see in 3D in much the same way we do, and identify the rocks and slopes in front of it, and then analyse if any are outside of his capabilities."

The rover is the first to be equipped with a sophisticated drill, which can burrow down two metres below the surface and process samples in its on-board laboratory. It should be able to find microbes if there are any, and look for life-linked molecules that could hint at life deep in Martian history.

Building a machine capable of looking for life brings huge challenges, not least the problem of bringing life from Earth with you. For engineers, it has meant literally re-inventing the rover wheel.

Meacham shows us their solution: "These metallic wheels are really an important part of the locomotion system. We're not allowed to use rubber, because it's an organic material, and if we're trying to detect life on Mars we don't want to detect something we've brought with us. So instead we have to get that same rubber compression, the squidginess, in a metal wheel, which is exactly what these metal wheels do."

The actual flight-model rover is being constructed in a purpose-built clean room at Airbus, where teams work shifts to clean and sterilise the components and instruments arriving from science research institutes and universities across Europe.

Javier Pérez Mato, Lead Avionics Integration Engineer showed us around: "This small panel that you can see over there, the square shape, is where all the electronics of the service module of the ExoMars Rover will be built. Everything is assembled in this room which was designed specifically for the ExoMars mission. And if there is life on Mars I hope we find it with this mission!"

The absolute imperative need not to take samples of life from Earth to Mars means great lengths have been taken to keep the rover pristine, including devising ways for the team to work on the rover remotely. ExoMars Delivery Manager Abbie Hutty explains:  "There have been a lot of different challenges getting tools very clean, getting all of the ground support equipment very clean, and also this facility here is so that all of the electronic engineers can work on the rover but without having to go into that cleanroom facility, because it's such a big deal to have to put all of the gear on to go in there."

The joint ESA-Roscosmos mission has already launched its first spacecraft to the red planet - the ExoMars Trace Gas Orbiter - which blasted off from Baikonur in 2016.

It has been in full operation since April this year, sniffing the atmosphere for methane, and imaging the surface in detail.

After a series of meetings - including one at the University of Leicester, UK and another at the Belgian science policy office BELSPO - the team has now selected the landing site for the second ExoMars mission.

They want the rover to explore a zone called Oxia Planum, a former lake close to the equator.

Hakan Svedhem, ExoMars TGO Project Scientist at ESA, explains the choice: "Oxia Planum is really one of the most interesting places to go with a lander to investigate. In particular, with the drill cores you can take up and do analysis of the surface material and subsurface material.

"In addition it is quite a safe place to go and land, because we know the surface is safe for landing. It's located on a low level, so that the spacecraft has a lot of atmosphere to go down through and slow down, and has time to react and respond before it lands."

The Russian component of the mission is the landing platform which will carry the ExoMars rover.

The platform should be loaded with 11 science instruments to measure the Martian atmosphere - although time is ticking to get them ready, as Daniel Rodionov, ExoMars Project Scientist at the Russian Space Research Institute IKI tells Euronews:

What the mission so far has already taught us is that Mars is much more diverse and dynamic than expected, as images from the Swiss CaSSIS camera on the ExoMars Trace Gas Orbiter show.

What's more, ESA scientists are detecting water ice just below the surface in lots of places, including down towards the equator.

Svedhem says: "The water on Mars is first of all underground. We don't find any open lakes, and the water is in the frozen form, so we have ice underground. Liquid water has always been seen as a pre-requisite for life. It doesn't necessarily mean that we have life there, but it is one ingredient that we would need to have life."

Is there life on Mars?

Our view of Mars is evolving quickly. So, do the experts think ExoMars will find signs of life, now or in the past?

Rodionov is confident: "Yes, naturally, I hope that Exomars will find traces of the existence of organic compounds on the surface of Mars. And, of course, Exomars is exactly the mission that should do this, it was designed for this," he says.

Abbie Hutty from Airbus agrees: "I think that we've got the best instruments that we possibly can on board to be able to detect life. The big thing is having the drill, so that we can actually get to the depths that we think that life would still be both alive if it could be, and recognisable even if it wasn't (alive). That's the big thing that nobody has ever really done before."

The projected mission will see the ExoMars rover drive around four kilometers and drill down two metres below the surface at least six times. If it found something, what would it look like?

"I think it's unlikely to be little green men, at this stage," smiles Meacham. "It's probably going to be bacteria, because we tend to find that in the most arid locations on Earth, it's the most hardy form of life that we know, so it's fairly likely that that's the kind of life we're going to find below the surface."

We should know more when the ExoMars rover platform lands in March 2021.

Could this be a sign of life on Mars?