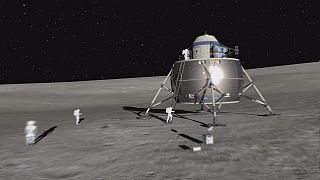 <p>Jan Wörner, Director General of the European Space Agency, has a bold new vision for space exploration. </p> <p>“My intention is to build up a permanent base station on the Moon,” he tells euronews from the agency’s main control room in Darmstadt. “Meaning that it’s an open station, for different member states, for different states around the globe.”</p> <p>Mankind has never had a permanent lunar presence, and so this new vision, that Wörner likes to call the ‘Moon village’, would represent a giant leap in space exploration.</p> <p>He has plenty of support for the concept, not least from <span class="caps">ESA</span>’s latest class of astronauts, like Denmark’s Andreas Mogensen, who flew to the <span class="caps">ISS</span> in 2015. He stresses that with the right level of commitment, as was shown when Russia landed on the Moon and Americans walked on the Moon, everything is possible. </p> <p>“We did this in the 1960s within a decade, and today in terms of technology development we’re much, much further ahead. Of course we can do it again,” Mogensen says.</p> <p>The idea is that the Moon base would follow the International Space Station as a global project. “So it will be the Americans, it will be the Russians, it will be the Chinese, it will be the Indians, the Japanese, and even more countries with smaller contributions,” says Wörner.</p> <p>For the moment the concept is short on detail, but high on enthusiasm. Earlier this month the European Astronaut Centre in Cologne hosted a workshop on how to build a permanent lunar village, and one key message that came out was that mankind can use the metals, minerals and water ice found on the Moon, rather than taking everything there in a spacecraft. The man who headed <span class="caps">ESA</span>’s Smart-1 Moon mission, Bernard Foing, explains: “The Moon is full of resources. We have found ices at the lunar poles, and we have found areas that are in almost constant daylight. And these places can offer us resources that we can use for construction and to support the lives of the astronauts on this Moon base.”</p> <p>Principal threats to any Moon base are solar and cosmic radiation, micro-meteorites and extreme temperatures. To counter those threats Irishman Aidan Cowley is working at <span class="caps">EAC</span> on using the lunar soil itself to build protective domes. </p> <p>“One of the ideas we had is could you potentially use this material to 3D print a habitat structure or a building element on the Moon, and we think you can,” he says. “Our concept is that a rover would land on the surface of the Moon. It would inflate this inflatable dome or bladder-like system, and then around that the rovers would begin to construct a dome that would provide the protection for the astronauts inside the dome.” </p> <p>Cowley’s team is looking at using microwave technology, and even solar power to create the ‘building blocks’ of a Moon habitat. “So you put down a layer of dust, you sinter it, you put down another layer of dust, you sinter it, and you keep repeating this until you’ve built whatever kind of structure you’re trying to build,” he says.</p> <p>Of course it is not easy to go to the Moon to test out new ideas, so scientists look for places with rocks and dust that are similar, like the Eifel volcanic park near Cologne. We followed one group, led by Foing, now Director of the International Lunar Exploration Group, who were testing a scenario in which one of the researchers plays the role of an astronaut on the lunar surface, and his colleague guides him from a distance.</p> <p>The idea is to see how the astronaut interacts with the base station, and how the spectrometer on the group’s mock-up lunar lander identifies minerals that could be useful for building and sustaining a Moon base. </p> <p>Oscar Kamps, Geology Student, Utrecht University explains: “I’m the astronaut in this simulation. So she directed me to a sampling site she wanted to sample, and told me when I had to come back and measure the sample in front of this little laboratory.” </p> <p>On this sunny winter morning the test went well, says Oscar’s colleague, Marloes Offringa, an Earth Sciences Student from VU University Amsterdam: “The light conditions are very good at the moment so you don’t need to use any alternatives, so it was really easy to get a good signal.” </p> <p>The field trip to the Eifel volcanic park is just a small step towards the giant leaps needed to turn the vision of a Moon village into reality. However, the foundation is laid, with the ambition to make it happen. Jan Wörner stresses that it need not be extraordinarily expensive, either.</p> <p>“The advantage of the idea of Moon village is that we don’t need a big amount of funding at the beginning. That means we can start with a small landing mission, which many countries are already planning, up to a huge investment for instance for some telescopes, a radio telescope on the far side of the moon. So it’s multiple uses, by multiple users, but a single place.”</p> <p>It could be 20 years before technology is ready to make it happen, but <span class="caps">ESA</span> is not alone in this. The Chinese are planning a lunar rock sample return mission, Russia is developing a robotic lander with <span class="caps">ESA</span> support, and <span class="caps">NASA</span>’s Orion capsule with an <span class="caps">ESA</span> service module should fly around the Moon before 2020. </p> <p>We are going back to the Moon, a place which is scientifically interesting, technologically challenging, and represents a superb testing ground for mankind’s exploration of the solar system.</p>