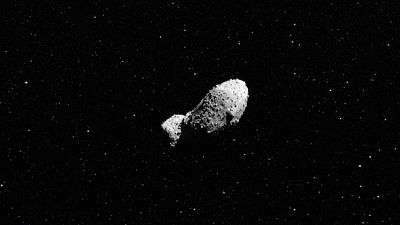 <p>How real is the threat of an asteroid hitting Earth, and is there anything we can do to prevent it from happening? </p> <p>Asteroid impacts are nothing new. Only last year, one exploded over the city of Chelyabinsk in Russia injuring 1500 people and damaging some 7,000 buildings.</p> <p>“It was a pretty nasty event, luckily nobody was killed, but it just shows the sort of force that these things have,” says Alan Harris, Senior Scientist, <span class="caps">DLR</span> Institute of Planetary Research Berlin. </p> <p>While there was surprise nobody saw it coming, the asteroid itself wasn’t that big, measuring no more than 20 metres across. It was tricky to spot, arriving into Earth’s atmosphere backlit by the Sun. </p> <p>In fact, much bigger threats lurk out in space. Just a few days ago another asteroid 270 metres wide passed near Earth. That kind of object could cause much more damage.</p> <p>“Something with the size of a hundred metres for instance, which still isn’t very big, you’re talking about something that would fit into a football field, and that could actually completely destroy an urban area in the worst case. So those are the things that we’re really looking out for, and that we’re trying to find ways to tackle,” says Harris. </p> <p>Action to address the asteroid threat is already underway. Earlier in February, space scientists and policy experts from all the major space-faring nations held talks to create a framework for action. </p> <p>“Last year we were still in a situation where if an asteroid were threatening to impact on our planet we would not have the process in place to react to it. We made the first step to do that by establishing this group,” Detlef Koschny from the European Space Agency said. </p> <p>The group is backed by the United Nations, and while astronomers work to spot new asteroids near Earth, they also decide what we’d do if one turns out to be a serious threat.</p> <p>It is estimated about 20,000 asteroids with diameters between a hundred metres and several tens of kilometres are orbiting near Earth</p> <p>Specialists like Alan Harris are developing plans to help stop an asteroid on a collision course with our planet.</p> <p>“So one of the main ideas we are considering is to simply hit the asteroid with a spacecraft, so it’s a little bit like cosmic billiards.</p> <p>‘‘We want to change the orbit of an asteroid, and what we are doing basically is attempting to transfer momentum to it with a spacecraft. </p> <p>“In practice of course the spacecraft is only a very small object compared to the asteroid. It has very little mass, the asteroid is very big. So we have to hit the asteroid very hard with the spacecraft, we have to get up to a very high velocity with the spacecraft,” Harris said. </p> <p>Of course, asteroids aren’t the only menace we face. The other major threat is space debris. Although it almost certainly won’t kill or injure people on Earth, it could cause havoc amongst our current fleet of satellites. </p> <p>So what is it? “It’s largely rubbish from the space race. Of the 16-17,000 objects that we can track from ground stations up there, just about 1,000 are operational spacecraft, all the rest are remnants of past spaceflight activities, and more than one half of these objects are in fact fragments from on-orbit collisions recently, and also fragments from on-orbit explosions,” says Heiner Klinkrad from the European Space Agency. </p> <p>These days, missions are designed not to leave litter behind in space. To tackle what is already there, however, engineers are promoting technologies that are similar to those that could be used to push asteroids off course. </p> <p>Heiner Klinkrad explains: “So the main intention in order to remedy the situation is removing mass from orbit. This you can do by, for instance, mounting motors on the object and firing those motors to put a thing to an immediate re-entry. The other, more subtle thing, is that you artificially increase the drag force on such an object, and then the orbit will be slowly lowering over time, mostly in an uncontrolled fashion.”</p> <p>It seems two conclusions can made: firstly, similar space technologies could help us burn up space debris and push away asteroids.</p> <p>Secondly, both issues are being taken seriously. </p> <p>“When you compare the risk of debris against asteroids you can say that the debris risk is more immediate, and the asteroid risk is higher,” says Klinkrad. </p> <p>Alan Harris agrees: “We need to be prepared for this, we need to be so that the next time it happens it may not be a 20 metre object that explodes in the atmosphere, it may be a 50 or a 100 metre lump of iron that comes in, and you wouldn’t want that to let that impact at all.”</p> <p>Thankfully the initial steps to prevent such a disaster movie scenario coming true are now being taken.</p> <p><a href="http://cosmos.esa.int/web/smpag">http://cosmos.esa.int/web/smpag</a></p>