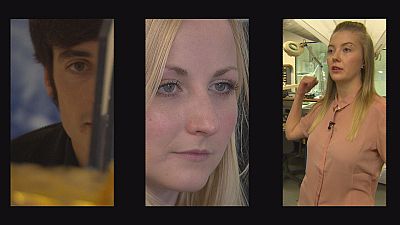 <p>Meet the space cadets, three young engineers with enviable jobs that are quite literally out of this world. This edition of Space focuses on three professionals who’ve turned their dreams of working in space into real down-to- Earth careers. </p> <p>In the UK, 26-year-old Abbie Hutty, a spacecraft structures engineer at Astrium, is a proud member of the ExoMars team. She is developing the structure of the mission’s rover, ensuring that the actual body of the vehicle and other components are all structurally strong enough to withstand the launch from Earth, and landing on Mars.</p> <p>Twenty-seven-year-old Marc Costa Sitjà, Science Operations Engineer at the European Space Agency, uses the huge antenna at Cebreros, west of Madrid, to ‘drive’ <span class="caps">ESA</span>’s Venus Express spacecraft around the planet. Every day he sends commands and receives data to and from the spacecraft from the agency’s <span class="caps">ESAC</span> facility near the Spanish capital. </p> <p>Maria Komu, a 27-year-old researcher at the Finnish Meteorological Institute, works on Finnish mini satellite Aalto-1, and has a hands-on role developing a weather instrument for <span class="caps">ESA</span>’s ExoMars <span class="caps">EDM</span> mission.</p> <p>Space is a childhood dream turned reality for all three. For Abbie the realisation that space wasn’t just science fiction came when she was still at school and she heard of the Beagle 2 mission to Mars, a lander that was developed in the UK by British engineers. Maria tells the story of a book about a school visit around the solar system that enchanted her as a young girl. Meanwhile Marc cites a vivid blue image of Venus as an inspiration to his career. </p> <p>Abbie, Marc and Maria are all educated to masters level, while Maria continues studying towards a doctorate. They’re on the first steps of the career ladder, and that means plenty of learning ‘on-the-job’. Maria had to master soldering, programming, and testing, Marc developed his skills by creating software that helped a mission to better fulfill its purpose, while Abbie had to understand better the behaviour of particular materials in the cold vacuum of space.</p> <p>The excitement of working in space is summed up by Abbie: “I think the space industry is quite a privileged industry to work in, because whilst you are still managing projects and meeting schedules and deadlines, and creating a product, at the end of the day that requires a certain amount of processes down on it, you can also come down to the clean rooms and look through the window and see your part of a spaceship, and think ‘that’s going to Mars, and I did that bit’, and you don’t get that anywhere else.”</p> <p>Web links:</p> <p>Space Careers<br /> <a href="http://www.space-careers.com">www.space-careers.com</a></p> <p>Marc Costa Sitjà <br /> <a href="http://www.esa.int/Our_Activities/Space_Science/Venus_Express">www.esa.int/Our_Activities/Space_Science/Venus_Express</a><br /> “es.linkedin.com/pub/marc-costa-sitjà/45/a60/a07”:http://es.linkedin.com/pub/marc-costa-sitjà/45/a60/a07/ <br /> Twitter: @marcsit</p> <p>Abbie Hutty: <br /> <a href="http://www.astrium.eads.net">www.astrium.eads.net</a><br /> <a href="https://www.facebook.com/pages/Brenda-The-Mars-Rover/168115159979958?sk=info">www.facebook.com/pages/Brenda-The-Mars-Rover/168115159979958?sk=info</a><br /> Twitter: @BrendaRover </p> <p>Maria Komu<br /> <a href="http://www.aalto-1.tkk.fi">www.aalto-1.tkk.fi</a><br /> <a href="http://en.ilmatieteenlaitos.fi">en.ilmatieteenlaitos.fi</a></p>