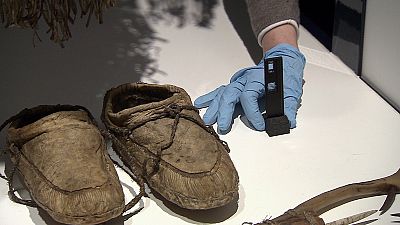 The precious relics on show in our museums provide us with a unique connection to the past which might otherwise be lost.

But these remains are fragile, and the danger is not always visible. Airborne pollutants are among the threats. They are invisible, destructive and rarely detected.

At the Viking Ship Museum in Oslo, there’s growing concern over the air quality inside some of the showcases:

“There is something on the inside of the glass. We don’t really know what it is. And now of course we want to know what kind of dust it is and whether it is dangerous,” says Anne Sommer-Larsen, Conservator at the Museum of Cultural History.

This mysterious dust has prompted the museum’s conservator to test a new kind of dosimeter – a device that measures an object’s exposure to a given hazard over time. This one is the result of a European research project, whose aim is to develop an early warning system on indoor pollution before it affects the artefacts.

This test will tell whether air pollutants are responsible for the degradation of organic materials on show.

“This is a Canadian eskimo shoe. After being on show in the museum for many years, it’s become completely stiff, you almost can’t bend it. But the deterioration could be worse,” says Anne Sommer-Larsen.

The prototype was developed by the Norwegian Institute for Air Research. Until now, museums measured factors like light, temperature and humidity, but not air pollutants. According to archaeologist Elin Dahlin, there are several reasons for this:

The new dosimeter allows users to read the results on site. In the past, it was a laborious procedure – conservators had to use two different sensors and send them to different laboratories to be analysed.

“Curators will be able to see the result on the computer screen like a traffic light signal, with a green light for a good environment, a yellow light for a possible problem and a red light for a risk environment.”

Simulation tests are being carried out in glass chambers at the Norwegian Institute for Air Research, with organic materials exposed to air pollutants in similar conditions to those inside museums. The aim of the project is to carefully study the effects of pollution on the artefacts in order to develop ways of improving indoor air quality and protect our precious cultural heritage.