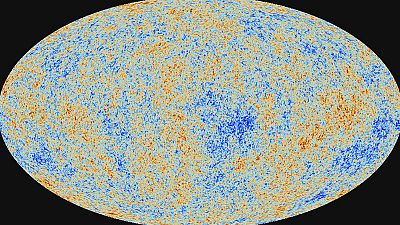 <p>Scientists have traced a unique new map of the first light of the universe, and raised profound questions about the Big Bang. The image of the cosmic microwave background they have released was taken by <span class="caps">ESA</span>’s Planck satellite, and its results could have a significant impact on the field of cosmology.</p> <p>“It turns that most of this image, most of this map, fits beautifully our very simple model. At the same time we find some strange things, and this is where it starts to get interesting, because we see some signs of things that do not fit,” explains <span class="caps">ESA</span>’s Planck Project Scientist Jan Tauber. </p> <p>“Roughly speaking the things that we are finding that are not as we expect are features that are across the whole sky. When you look only at the large features on this map you find that that our best fitting model, our best theory has a problem fitting the data, there is a lack of signal that we would expect to see,” he says.</p> <p><a href="http://www.youtube.com/subscription_center?add_user=euronewsknowledge"><img src="https://static.euronews.com/articles/223088/493x225_knowledge-youtube-design_2120x1192_vega_v2.jpg"/></a></p> <p>The news that the early universe is not quite as was thought has left the greatest minds in cosmology spinning with excitement. </p> <p>George Efstathiou, Professor of Astrophysics, University of Cambridge, is a key member of the Planck Science Team.</p> <p>“The idea that you can actually experimentally test what happened at the Big Bang still amazes me,” he says.</p> <p>The Big Bang theory remains intact of course, but the concept of inflation could be put to test by the Planck data.</p> <p>“We see these strange patterns that are not expected in inflationary theory, the simplest inflationary theories,” explains Efstathiou. </p> <p>“So there’s a real possibility that we have an incomplete picture. It may be that we have been fooled, that inflation didn’t happen. It’s perfectly possible that there was some phase of the universe before the Big Bang actually happened where you can track the history of the universe to a pre-Big Bang period.”</p> <p><a href="https://static.euronews.com/articles/218322/1920x1080_Planck11-full-size.jpg" target=blank><img src="https://static.euronews.com/articles/218322/606x341_Planck11-full-size.jpg"/></a></p> <p>The Planck mission could test ideas about how the early universe was formed.The puzzle is that at small scales the data fits the theoretical model very nicely, but at larger scales the signal from the cosmic microwave background is much weaker than expected.</p> <p>Efstathiou is looking for answers: “Can we find a theoretical explanation that links together the different phenomena that we have seen, the different little discrepancies, with inflationary theory? That’s where there’s the potential for a paradigm shift, because at the moment there’s no obvious theoretical explanation that links together these anomalies that we have seen. But if you found a theory that links phenomena that were previously unrelated, then that’s a pointer to new physics.”</p> <p>It appears that the audacious Planck mission really will shed new light on the dawn of time.</p> <p><h3>Find out more about the Planck Mission with our bonus interviews</h3></p> <p><iframe width="560" height="315" src="http://www.youtube.com/embed/w_-rS2v5Wt4" frameborder="0" allowfullscreen></iframe><br /> <em>Marc Kamionkowski, professor of Physics and Astronomy, Johns Hopkins University</em></p> <p><iframe width="560" height="315" src="http://www.youtube.com/embed/ioxlZhqcQ3A" frameborder="0" allowfullscreen></iframe><br /> <em>Jan Tauber, Planck Project Scientist, <span class="caps">ESA</span></em></p> <p><iframe width="560" height="315" src="http://www.youtube.com/embed/YcdrdybMbyU" frameborder="0" allowfullscreen></iframe><br /> <em>George Efstathiou, Professor of Atrophysics, University of Cambridge</em></p>