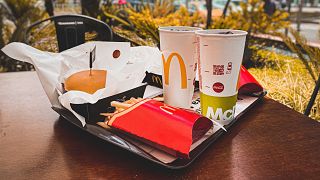 New legislation could see McDonalds ditch some single use packaging in the EU.   -   Copyright  Pexels
By Rosie Frost  •  Updated: 30/11/2022

They were spotted by a Twitter user in France who shared images of glasses, chip holders and even Happy Meal boxes. The post was retweeted by President Emmanuel Macron who heralded the reusable packaging as a sign of things to come.

“Look around you: in France, changes are being made to alter our consumption patterns and reduce our waste,” he said.

The packaging is part of a trial across a few fast food locations in France and the rest of Europe, McDonald's has said.

And it comes as the European Commission pushes for shops, restaurants and other businesses to ditch single-use packaging.

How is the EU aiming to reduce packaging waste?

Imminent legislation could see fast food restaurants forced to serve 40 per cent of meals in reusable packing when customers sit inside to eat.

A draft revision of the EU Packaging and Packaging Waste Directive sees the EU aim for all packaging to be reusable or recyclable by 2030.

The proposal for revisions to laws tackling waste highlights the average European generates around 180kg of waste from packaging every year.

Without further measures to reduce waste, this will continue to grow before the end of the decade.

"The way goods are packaged can and should be done a lot better," said European Commission Vice President Frans Timmermans.

Such overpackaging is a nuisance to us and increasingly damaging to our environment.

He added that everyone has experienced the problem of deliveries with a massive half-empty box or food served in single-use containers rather than on plates at restaurants.

"Such overpackaging is a nuisance to us and increasingly damaging to our environment."

The new rules include a number of measures that, if approved by EU member states and the European Parliament, could impact companies like McDonald’s across the bloc.

Combined, new legislation for reusable and recyclable packing means member states would have to cut waste by 15 per cent per person by 2040 compared to 2018.

Applying all of the measures included in the proposal would reduce greenhouse gas emissions from packaging by 23 million tonnes by the end of the decade, according to the EU.