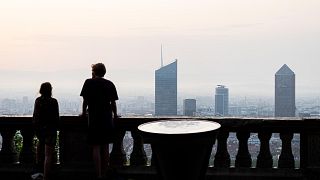 View of the city of Lyon from the Fourviere hill during an episode of air pollution in the whole region of Auvergne-Rhone Alpes.   -   Copyright  HANS LUCAS via Reuters
By Rosie Frost  with Reuters  •  Updated: 26/10/2022

The European Union is set to propose tougher legal limits on toxic air pollution, according to the bloc’s top environmental official.

The proposition also includes rules that would make pharmaceutical companies pay to clean up wastewater that is polluted by their products.

It will bring EU air quality standards closer to the latest World Health Organisation (WHO) recommendations and give local authorities more power to clean up their air.

The new rules could also allow citizens to claim compensation if they suffer the health effects of illegal pollution.

Another of the proposed regulations could make companies - particularly in the pharmaceutical and cosmetic industries - responsible for the cost of cleaning up pollution released into wastewater from their products. It is intended to prevent taxpayers from having to pay these costs in full, Sinkevicius said.

Once they are formally suggested, the new air quality regulations will need to be negotiated and approved by EU member states.

Most Europeans think health conditions like asthma and cardiovascular disease are serious problems in their country because of air pollution, according to a Eurobarometer survey published this week.

The latest figures from the European Environment Agency show that air pollution still causes more than 300,000 premature deaths a year. The report found that if the most recent air quality guidelines from the WHO were followed, the number of fatalities could be cut in half.

There has already been progress on cleaning up Europe’s air, however. According to the EEA report, in the early 1990s nearly a million premature deaths were caused by fine particulate pollution. By 2005, that number had been more than halved to 450,000.

But the survey shows that people in Europe still believe the fossil fuel industry, companies and public authorities are not doing enough to promote good air quality.

“People tell us that they want clean air to breathe. People living in cities, asthma sufferers and those living near industrial plants, they are all worried and they are asking us to act, ” says Sinkevičius.

“The Commission will lead the way with an ambitious proposal to strengthen EU air quality standards.”