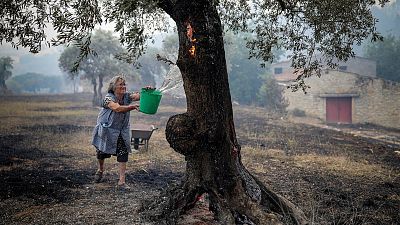 For hundreds of millions of people in Europe, unbearably hot weather has been driving the reality of climate change home over the last month.

Temperatures in the UK hit 40C for the first time in recorded history, while France, Portugal, Spain, Greece and Croatia have been battling wildfires for weeks or even months.

We know that global warming is the cause and experts have said that the UK's recent record temperatures were made 10 times more likely by climate change. It’s a straightforward connection to make during a heatwave.

Despite this, dangerous climate sceptics are still being published in national newspapers, bending over backwards to claim it’s because the Earth is moving closer to the sun.

So if you’re feeling a little hazy on the science, or need some points to persuade the climate inactive in your life, we’ve got you covered.

How are climate change and heatwaves connected, exactly?

The planet’s average temperature has risen by 1.1C since pre-industrial levels, largely because of the huge increase in greenhouse gases human activity have unleashed. Carbon dioxide (CO2) is the biggest contributor to global warming; its concentration in the atmosphere has soared by 48 per cent between 1750 to 2020.

Like glass in a greenhouse, CO2, methane, nitrous oxide and other gases trap the sun’s heat, causing less warmth to return to space.

As average temperatures rise - ever closer to the 1.5C mark which will be disastrous for many countries - the amount of weather at the ‘extremely hot’ end of the spectrum increases, making extreme heat events more frequent, longer, and more intense.

A heatwave that would have struck one in 50 times will strike five times more often.

What can scientists tell us about the cause of heatwaves?

“I think we can very confidently say that every heatwave occurring today has been made more intense and more likely because of climate change,” said co-author Dr Friederike Otto, a senior lecturer in climate science at the UK’s Grantham Institute for Climate Change and the Environment.

In other words, we no longer need to wait for ‘attribution studies’ to prove that climate change is making heat events worse. Such research is still really valuable, however.

A study by World Weather Attribution (WWA) found that the heatwave which destroyed a Canadian village last summer - after a record-breaking 49.6C was followed by wildfire - was made 150 times more likely by climate change. It would have been “virtually impossible” without it, the climatologists concluded. Those who returned to rebuild Lytton were again evacuated in late July.

The UK's recent record breaking heatwave in July was also made at least 10 times more likely by climate change, according to experts. The team at WWA adds that this is a conservative estimate as temperatures have risen higher than climate models simulate.

Dr Mariam Zachariah, who also works at the Grantham Institute and WWA, says “there have been so many extreme events happening this year, it has become difficult to look at every one.”

Focussing on events that have been most impactful to people and agriculture is a key part of climate communication, however.

WWA chose the UK for its most recent study because it is "particularly unaccustomed to very high temperatures as the ones that we have seen [in July]" according to Friederike Otto, a senior climate science lecturer at Imperial College London.

Temperatures recorded at two of the sites the group analysed would have been "statically impossible" if the world hadn't seen 1.2C of warming since the late 1800s, the study says.

Despite the alarming data sets she handles, Dr Zachariah tells Euronews Green, “the message is that we have to start acting, and I do have a lot of hope for us; if we act in time we can do enough to adapt and mitigate climate change for the future.”

What is causing the heatwaves in Europe - and how hot will it get?

Extreme weather is, naturally, relative to ‘normal’ conditions. In the UK, meteorologists define a heatwave as a period of at least three consecutive days where daily maximum temperatures meet the temperature threshold - which varies by county. In London, for example, it's 28C.

Having redesigned the new temperature colour scale to make it accessible to colourblind people last year, he revealed that he “never expected” the dark red to be used on UK maps.

“We hoped we wouldn’t get to this situation but for the first time ever we are forecasting greater than 40C in the UK,” Dr Nikos Christidis, climate attribution scientist at the Met Office said announcing the UK’s first ever Red warning for exceptional heat.

“The chances of seeing 40C days in the UK could be as much as ten times more likely in the current climate than under a natural climate unaffected by human influence.”

Heatwaves are generally driven by high pressure systems. In July, it was the ‘Azores high’ - a high pressure system which usually sits off Spain, in the North Atlantic - spreading north and creating heatwave conditions. This atmospheric region is also expanding as a result of climate change, a recent study shows.