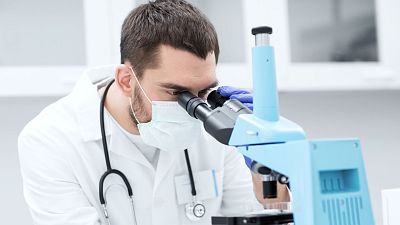 Plastic-munching bacteria could help save the planet, scientists have claimed.

But according to a new study of 29 European lakes, some naturally-occurring lake bacteria grow better on the remains of this plastic than on natural matter like leaves and twigs.

This means enriching the water with particular species of bacteria could help banish plastic pollution.

"It's almost like the plastic pollution is getting the bacteria's appetite going,” said Dr Andrew Tanentzap in the University of Cambridge's Department of Plant Sciences, senior author of the paper.

“The bacteria use the plastic as food first, because it's easy to break down, and then they're more able to break down some of the more difficult food - the natural organic matter in the lake."

According to the study, the rate of bacterial growth more than doubled when plastic pollution raised the overall carbon level in lake water by just 4 per cent.

These turbo-charged bacteria then stimulate the entire lake eco-system.

"(These results) suggest that plastic pollution is stimulating the whole food web in lakes, because more bacteria means more food for the bigger organisms like ducks and fish,” Dr Tanentzap said.

The bacteria are no silver bullet, the study authors claim - plastic pollution still has a devastating impact on natural bodies of water.

But the bacterial breakthrough could help minimise these consequences, said Professor David Aldridge, a Cambridge University zoologist involved in the study.

"Unfortunately, plastics will pollute our environment for decades,” he warned.

“On the positive side, our study helps to identify microbes that could be harnessed to help break down plastic waste and better manage environmental pollution.”

Do other bacteria eat plastic?

The lake bacteria aren't the only ones who thrive on a plastic diet.

In 2020, Researchers in Germany have discovered a strain of bacteria capable of breaking down some forms of plastic.

Polyurethane (PU) is a kind of plastic used for items like sports shoes, mechanical parts and synthetic fibres, like Spandex. It is hard to recycle because it is thermosetting, meaning it does not melt when heated up.

Where other plastic can be processed and turned into new items, a lot of PU waste ends up in landfill. Once there, it releases toxic chemicals including carcinogens, the chemicals that can lead to cancer.

A team of scientists found a bacterium which attacks chemical bonds that keep the material together. Dr Hermann J. Heipieper, lead scientist at the Helmholtz Centre for Environmental Research UFZ explains how it all works; the bacteria take the building blocks for PU and use them as a source of energy. The plastic-eating microorganism was first found to have evolved at a waste site where PU was being dumped.

In 2018, a different team of scientists discovered an enzyme capable of breaking down PET, the material used to make plastic bottles. This accidental breakthrough was made when looking at organisms that had evolved at a waste dump in Japan. While trying to work out how the process had occurred, they inadvertently changed something that made the molecule even better at breaking down the bottles.

Could this solve the problem of plastic pollution?

Despite these breakthroughs, it is important to ensure that advances of this kind don’t encourage an increase in plastic use - as most forms are still notoriously difficult to destroy. Already, Europe produces 60 million tonnes of plastic every year, but worryingly only around 30 per cent of this is eventually recycled.

Although these kinds of advances could lead to a more sustainable future, they aren’t the silver bullet for our plastic problem, Dr Heipieper warned.

“The problem of billions of tons of plastic waste, that are already in landfills or even in the ocean, will surely not be solved by bioremediation. Thus, it is now important to assess which plastic compounds are biodegradable," he said.

“It is conceivable that the industry will use more degradable precursors in the production of plastics in the future, taking into consideration scientific knowledge of the degradability by microorganisms.

“However, a fundamental switch to new plastic compounds in the future will only be achievable through changes in governance and legislation.”