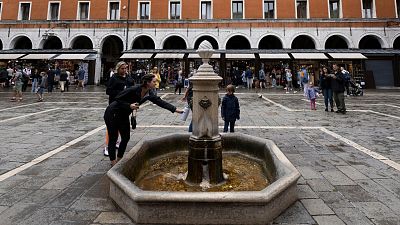 Venice has launched a campaign to encourage tourists to drink from water fountains instead of using plastic bottles.

In 2019, 5.5 million people visited the city which has a population of just 50,000. Depending on the season, tourism is responsible for up to 40 per cent of waste production the city council tells AFP.

As visitor numbers begin to recover from the pandemic, the city is looking for ways to limit the impact travellers have on the local environment.

What is Venice doing to prevent overtourism?

From 2023 Venice will have a tourist tax, and now a campaign has been launched to encourage people not to buy multiple single use plastic bottles.

Water fountains are easy to find with 126 spread throughout the city. There’s one around every 100 metres, says Alberto Chinellato, an architect for the city council.

“Encouraging the use of free drinking water produces less waste (...) but also brings fewer bottles in the historic centre, which means less pollution and less transport,” he explains

Water distribution company Veritas has developed a mobile app to help tourists locate places to fill up their water bottles. It maps all of the fountains in Venice and by activating your GPS, you can find a route to the closest one.

Why is reducing plastic waste in Venice important?

Owner Gioele Romanelli created his own printed map which marks the water fountains in Venice with a blue water droplet. He says it gives people a visual idea of how easy this simple waste reducing action is.

When they check in, guests are told about the drive to cut down on plastic and given one of these maps. He says their reactions are often enthusiastic and some are surprised to learn the water in the city is drinkable.

“With this small gesture, our customers can actively participate in the battle against plastic," he says, seeing it as a way, in a city "that has a crazy number of tourists," to convey a certain sense of "responsibility."

And preventing pollution is of key importance in a city like Venice that is especially vulnerable to the impact of climate change.

As Romanelli explains, “we will be the first visible victim of a possible rise [in sea levels] and so it becomes indispensable for a city that is known to have a crazy number of tourists.”

Watch the video above to see how Venice is encouraging tourists to stop using plastic bottles.