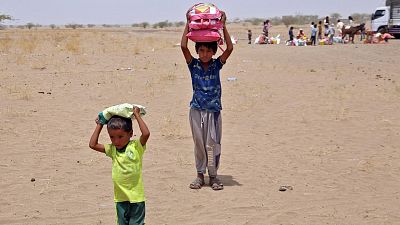 Yemenis displaced by the conflict, receive food aid and supplies to meet their basic needs, at a camp in Hays district.   -   Copyright  Khaled Ziad / AFP
The opinions expressed in this article are those of the author and do not represent in any way the editorial position of Euronews.
By John Nordbo  •  Updated: 04/07/2022

John Nordbo is a senior climate adviser at CARE Denmark. He holds a MA in political science and has followed the international climate talks for two decades, currently focusing on climate finance issues. Before entering the NGO field, John worked as a government official in the Danish Ministry for Environment and Energy. Here he explains where many countries’ climate finance actually comes from.

This climate finance commitment was not an altruistic pledge by rich countries. It was part of a broader global green deal arising from the UNFCCC’s COP15 negotiation. The deal would help the Global South to step up climate action despite the pressing need for economic development and poverty reduction.

In recognition of these needs, the G7 and other rich countries promised to provide “scaled-up” finance, reaching $100 billion (€96 billion) a year in 2020. They also committed to finding this money from “new and additional” budgets - not existing ones.

However, the latest report from humanitarian aid organisation CARE Denmark reveals how much public climate finance reported to the UNFCCC by developed countries was really “new and additional”.

The findings show that most of the public climate finance reported by rich countries from 2011 to 2018 was actually taken directly from development aid budgets.

The failures of the G7

Only three of the developed countries assessed consistently surpassed the longstanding UN-sanctioned commitment.

This commitment involves providing 0.7 per cent of their gross national income as Official Development Assistance while providing large per capita amounts of climate finance on top of that. These countries were Luxembourg, Norway and Sweden.

The G7 countries, in contrast, bear the responsibility for most of the failure.

Canada, France, Germany, Italy, Japan, the United Kingdom and the United States represent some of the largest global economies - and the countries reporting large amounts of climate finance.

But despite reporting such large amounts, these economies provide almost no additional climate finance. This is because they have almost entirely failed to provide 0.7 per cent of their gross national income as Official Development Assistance.

In comparison, across the same eight-year period, Luxembourg, Norway and Sweden provided more than 1 per cent of their gross national income as funds for development and climate change objectives.

Despite having economies 40 times smaller than those of the G7, these small European nations provided substantially more climate finance that is “new and additional” to aid commitments.

What is the impact on development and SDG progress?

In 2015, the UN General Assembly set an agenda to secure sustainable development across the world by 2030.

The agenda requires that 17 Sustainable Development Goals (SDGs) are met, including the eradication of extreme poverty and hunger as well as achieving gender equality and empowerment of all women and girls.

The investment required to achieve these SDGs is vast and urgently needed. This urgency makes the findings from the CARE report particularly damning in the face of current global challenges – including Russia’s invasion of Ukraine, global energy and food insecurity, and the ongoing effects of the pandemic.

According to the World Food Programme, a total of 45 million people are on the brink of famine across 43 countries, unless they receive immediate life and livelihood-saving assistance.

The harsh realities of climate change will also add substantial costs to the development agendas in the Global South, creating a cycle of poverty that further undermines countries’ ability to build resilience.

Redirecting money from other aid projects to climate finance may actually make countries more vulnerable to the impacts of climate change in the long run.

This was recognised in the crucial IPCC report from climate scientists in April, which noted that “a key agreement was that climate financing should be ‘new and additional’ and not at the cost of SDGs.”

The IPCC articulated what millions of people across the Global South in particular are now experiencing firsthand, that “resources prioritising climate at the cost of non-climate development finance increases the vulnerability of a population for any given level of climate shocks.”

In other words, redirecting money from other aid projects to climate finance may actually make countries more vulnerable to the impacts of climate change in the long run.

The injustice of ‘either/or’ funding

The reality is the Global North has failed, and is failing, to cut its own emissions fast enough to bring climate change under control. These countries have gained enormous economic benefits from the near unrestricted combustion of fossil fuels. This has led to both high per capita emissions and incomes.

Meanwhile, there is a growing need for countries in the Global South to leap-frog fossil fuel intensive processes. Mitigation through the deployment of renewable energy, however, can carry extra costs compared to fossil fuel-based supplies.

Diverting funds from poverty, health, and education initiatives in developing countries to climate change mitigation and adaptation strategies in an ‘either/or’ scenario is fundamentally unjust.

This approach will only serve to widen the inequality gap between developed and developing countries, slow the achievement of the SDGs, and – crucially – result in those who have contributed least to the climate crisis paying the highest price.

It is critical that the G7 and other developed countries follow the example of Luxembourg, Norway, and Sweden. They must deliver their climate finance on top of the pledge to provide 0.7 per cent of their gross national income as Official Development Assistance.

Countries not yet meeting the 0.7 per cent target should redouble their efforts to do so within the next few years, making sure that their climate finance is contributed on top of a growing aid budget.

Otherwise, we are simply shifting the responsibility for climate action to the world’s poorest.