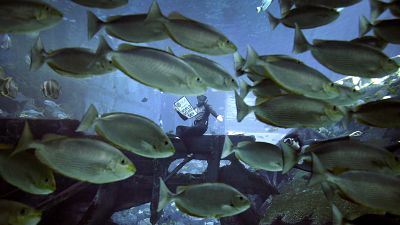 Fish exposed to fibres from our clothes are showing signs that microplastics are releasing harmful chemicals, according to a study by scientists at Duke University.

When we wash our clothes, fabrics made from synthetic materials shed tiny fibres into water that are then washed down the drain. Currently, most wastewater processing facilities don’t have the ability to remove these fibres meaning they end up in oceans, lakes and rivers. In some areas, they account for 90 per cent of microplastic pollution.

“Even if they are released miles from the ocean they can work their way down there. So they affect both freshwater and marine organisms,” says Duke University researcher Melissa Chernick.

Previous research has shown that fish end up eating a lot of these fibres and mechanisms in their digestive system allow them to pass through without much harm. This new study, however, suggests that the problem isn’t just with direct damage to the gut but with the chemical coatings on the plastics that are absorbed into the fish’s bloodstream.

While scientists are still working to identify the exact impact of these potentially toxic chemicals, some initial evidence shows that they are affecting reproductive hormones. More research needs to be done into whether these endocrine disruptors are passed on to us humans but given the number of fibres found in seafood, this could certainly be a cause for concern.

“Until now, most studies have focused on primarily on looking for the presence of plastics in animals without identifying what the effects on various tissues might be,” says Chernick. “But that’s exactly where our study suggests the science needs to go.”

If nothing else, the study proves that microfibre pollution is bad news for populations of marine life.

How do I keep these plastic fibres out of the sea?

The simplest solution would be to stop buying synthetic fibres, but that isn’t always as easy or environmentally friendly as it might sound. Besides, binning all of your non-natural clothing just adds to the problem of persistent plastic pollution by sending them to landfill where they will likely remain forever.

Washing items less frequently is always an option. As nearly 2,000 fibres are shed every time a synthetic item goes through your machine, skipping a wash day here and there can make a difference. Not to mention that when you do eventually fill the drum up, washing a full load reduces friction resulting in fewer fibres going down the drain.

Expensive filters that catch the fibres inside your washing machine are available, but a more accessible alternative might be a microfibre catching bag. Invented by a group of German surfers and tested by the Fraunhofer research institute, Guppy Friend is one such device. Its tiny mesh keeps the fibres inside the bag allowing you to dispose of them properly once your clothing is clean.