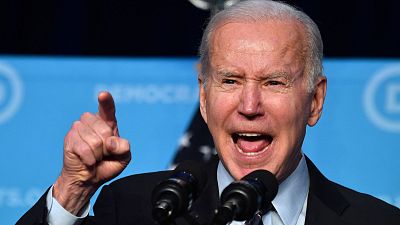 US President Joe Biden is reluctant to export LNG to Europe amid climate change concerns.   -   Copyright  AFP
By Maeve Campbell  with Reuters  •  Updated: 11/03/2022

The US government has pledged to ramp up liquefied natural gas (LNG) exports, to help cut Europe's reliance on Russian gas. However, progress is slow due to concerns about the impact on climate change.

The Ukraine crisis has underscored Europe's energy dependence on Russia, which supplies about 40 per cent of the natural gas used to heat its homes and generate electricity, and the Biden administration has vowed to help its allies break that chain.

The White House was weighing up the announcement of an interagency review of ways to boost LNG exports to Europe alongside Tuesday's decision to ban US imports of Russian oil products, people briefed on government decision-making told Reuters.

However, the interagency review has been shelved, at least for now, after some in the White House argued it would counter the administration's efforts to wean the US off fossil fuels.

Is LNG a clean fuel?

No. Natural gas (or LNG) might be the cleanest of the fossil fuels as it burns with much lower carbon emissions than coal or oil, but its drilling, extraction and transportation in pipelines results in the leakage of methane. The second biggest cause of climate change after carbon dioxide.

The US LNG industry has long claimed its fuel has less climate impact than Russian gas sent by leaky pipelines to Europe, but there's little hard data comparing the two.

The White House did not respond to inquiries about the change of plans.

Drilling, extraction and transportation results in the leakage of methane - the second biggest cause of climate change after carbon dioxide.

The European Commission published plans on Tuesday to cut EU dependency on Russian gas by two-thirds this year and end its reliance on Russian supplies of the fuel "well before 2030."

Some Biden officials hoped a more detailed US commitment to boost LNG exports would help convince European allies to join in the ban of Russian oil imports, the sources said.

"It was a no-brainer to send a market signal and they easily could have combined it with a push for more exports of heat pumps, renewables, advanced nuclear, etc., to reduce natural gas demand," said one of the sources.

The effort was reeled back amid "concerns from the climate team" in the Biden administration, the source said.

'Stay away from fossil fuel investments'

Trying to balance fighting climate change with other concerns, like keeping energy prices and inflation low and supporting union jobs, has been a dilemma for the Biden administration. Russia's February invasion of Ukraine has thrown the issue into high relief. Moscow calls the action a "special military operation."

In recent weeks, officials from the White House, the State Department, the Energy Department and other agencies have held discussions on whether the Federal Energy Regulatory Commission could expedite approval of new pipelines and approve requests to increase capacity at existing export terminals to help get natural gas to Europe, several sources said.

They also discussed whether the United States and the European Union could help guarantee portions of 20-year supply contracts necessary to finance the construction of new terminals and ports, and ways to get banks to finance some new projects. This is amid efforts by US climate envoy John Kerry to coax them to stay away from fossil fuel investments, the sources said.

"Perhaps, there could be some waiver or some other mechanism to help banks finance (LNG) infrastructure projects," said one source.

The United States has enough natural gas to produce at its 2020 rate for nearly 100 years.

The State Department has previously said financial institutions make their own decisions and that Kerry has not pressured them into making commitments. The United States has enough natural gas to produce at its 2020 rate for nearly 100 years, according to the latest government estimates, but tapping the nation's ample supply is constrained by lack of pipelines and export terminals, and the time it takes to build this infrastructure.

By the end of this year, the United States will have the world's largest LNG export capacity, with seven export terminals, enough to ship 11.5 billion cubic feet per day.

Exports are complicated: LNG needs to be pumped from underground to an export terminal, super-cooled and put onto a ship. When it reaches its destination, it is warmed and put into pipelines.

The total number of US cargoes shipped to Europe and Turkey in the first two months of 2022 reached a record of 164, according to data intelligence firm ICIS. The previous record was 125 cargoes in the first quarter of 2020.

EU energy: What countries will fill the gap left by Russian gas?